Imagine the open ocean as a microbial megacity, teeming with life too small to be seen. In every drop of water, hundreds of types of bacteria can be found. Now scientists have discovered that communities of these ocean microbes have their own daily cycles—not unlike the residents of a bustling city who tend to wake up, commute, work, and eat at the same times.

What's more, it's not all about the sun. Light-loving photoautotrophs—bacteria that need solar energy to help them photosynthesize food from inorganic substances—have been known to sun themselves on a regular schedule. But in a new study published in the July 11 issue of the journal Science, researchers working at Station ALOHA, a deep ocean study site 100 km north of Oahu, observed different species of free-living, heterotrophic bacteria turning on diel cycling genes at slightly different times—suggesting a wave of transcriptional activity that passes through the microbial community each day.

"I like to say they are singing in harmony," said Edward F. DeLong, professor of Oceanography at University of Hawaii at Manoa and the head of the Massachusetts Institute of Technology team that made this discovery.

"For any given species, the gene transcripts for specific metabolic pathways turn on at the same time each day, which suggests a sort of temporal compartmentalization," said DeLong, who was the first scientist to be hired by the University under the auspices of the Hawai'i Innovation Initiative. "It's a biologically and biogeochemically relevant new result."

The observations were made possible by advanced microbial community RNA sequencing techniques, which allow for whole-genome profiling of multiple species at once. The work was a collaboration between the Monterey Bay Aquarium Research Institute and DeLong's team, who together employed a free-drifting robotic Environmental Sample Processor (ESP) as part of a Center for Microbial Oceanography: Research and Education (C-MORE) research cruise at Station ALOHA. Riding the same ocean currents as the microbes it follows, the ESP is uniquely equipped to harvest the samples needed for this high-frequency, time-resolved analysis of microbial community dynamics.

What scientists saw was intriguing: different species of bacteria expressing different types of genes in different, but consistent, cycles—turning on, for example, the type of restorative genes needed to rebuild their solar-collecting powers at night, then ramping up with different gene activity to build new proteins during the day. "The regularity and timing of individual microbial activities is somewhat like a new shift of hourly workers punching in and out of the clock, day after day," DeLong said.

The coordinated timing of gene firing across different species of ocean microbes could have important implications for energy transformation in the sea. Marine microbes are critically linked to ocean health and productivity. The mechanisms that regulate this periodicity remain to be determined.

But can you set your watch to it? DeLong says you can, but it matters whether you're tracking the bacteria in the lab or out at sea. For example, maximal light levels at 23 meters depth at Station ALOHA were twice as high as light conditions that were previously used in experimental settings in the laboratory—which may have an effect on microbe activity and daily cycles. That's part of why it's so important to conduct this research in the actual open ocean environment.

This study was funded in part by the National Science Foundation and by a grant from the Gordon and Betty Moore Foundation [Grant GBMF3777]. Separately, in 2013, the Moore Foundation's national Marine Microbiology Initiative awarded DeLong and UH Manoa professor David Karl $4.2 million to explore how the trillions of microscopic organisms at the base of the ocean's food webs interact with each other and the environment.

DeLong aims to continue his groundbreaking in situ ocean research with support from the Moore Foundation and as co-director of the new Simons Collaboration on Ocean Processes and Ecology (SCOPE), a five-year $40 million collaboration funded by the largest private gift in UH history.

"There are some fundamental laws to be learned about how organisms interact, to make the system work better as a whole and be more efficient," DeLong said. "At its base, that's one of the main things we're after in SCOPE—these fundamental principles that make ecosystems work. These findings have tremendous applications in all sorts of arenas."

About the Environmental Sample Processor (ESP):

Development and applications of the MBARI ESP were made possible with funding from National Science Foundation Grant OCE-0314222 (to C.A.S.), National Aeronautics and Space Administration Astrobiology Grants NNG06GB34G and NNX09AB78G (to C.A.S.), the Gordon and Betty Moore Foundation (#2728; C.A.S.), and the David and Lucile Packard Foundation. http://www.mbari.org/esp/

About the School of Ocean and Earth Science and Technology

The School of Ocean and Earth Science and Technology at the University of Hawaii at Manoa was established by the Board of Regents of the University of Hawaii in 1988 in recognition of the need to realign and further strengthen the excellent education and research resources available within the University. SOEST brings together four academic departments, three research institutes, several federal cooperative programs, and support facilities of the highest quality in the nation to meet challenges in the ocean, earth and planetary sciences and technologies. http://www.soest.hawaii.edu/

About the Hawaii Innovation Initiative

The University of Hawaii is working in partnership with the private sector and government to build a thriving research enterprise in Hawaii that will develop a third major economic sector for the State, create high-quality living-wage jobs, and address the challenges and opportunities that face our communities and the world to improve our quality of life. More information about the Hawaii Innovation Initiative is available online at http://hawaii.edu/innovation. 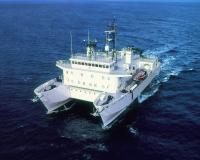