University of Groningen Professor of Drug Design, Alexander Dömling, has devised a method to rapidly synthesize thousands of new molecules and evaluate their properties as potential drugs. In a paper published by Science Advances on 5 July, he shows that this method works well when applied to boronic acid chemistry, an important technique in synthetic organic chemistry. The study also produced an inhibitor of the phosphatase MptpB, a virulence factor of Mycobacterium tuberculosis, which had previously been considered an 'undruggable' target.

'We use a miniaturized technology to perform organic chemistry at the nanolitre scale for drug discovery', explains Dömling. 'This allows us to create large numbers of variants of drug candidates and screen them for the required properties in a high-throughput system.' He calls the system he presented earlier this year 'unprecedented' for organic chemistry: 'This field has not yet embraced the high-throughput methods that are common elsewhere.'

Dömling uses acoustic dispensing, a technique that was introduced in cell biology and biochemistry in the mid-2000s. Reagents are stored in small wells in the source plates. Ultrasound pulses are used to shoot a small, nanolitre droplet up from the wells into another well on an inverted plate above it, the so-called destination plate. The tiny droplet sticks to this new well. A computerized system positions the destination plate to collect four different reactants, each with a different chemical building block. These are then left to react with each other.

'This method allows us to quickly synthesize thousands of variant molecules by using a large number of slightly different building blocks', says Dömling. For a molecule made from four building blocks, with 1,000 versions for each, the number of different molecules you will get is 1012. 'Using ordinary organic chemistry methods, this would take an impossibly long time to synthesize and assess.'

In Dömling's system, large numbers of variants are produced in nanolitre volumes in the wells. These wells are then sampled and analysed using mass spectrometry, to see whether the desired molecule has been produced. 'This is our quality control, and it also provides information on the reactivity of the building blocks.' Finally, the synthesized molecules are tested for a required property.

In two previously published papers, Dömling described this approach for the synthesis of isoquinoline and indole derivatives. Now, he demonstrates that the method also works for boronic acid chemistry, which has become a very important tool in organic chemistry. Boronic acids are used as intermediates in creating different carbon bonds and are also of interest as potential protein inhibitors.

In this new study, Dömling and his co-workers show that the boronic acid reactions work well. 'We use a one-pot approach with mild conditions. This has the added advantage that no protective groups are needed for the boronic acid, which makes the synthesis easier.' As project leaders Dr. Neochoritis and Dr. Shaabani explain, traditionally, boronic acid synthesis is sequential, synthetically demanding and time-consuming.

The study also shows that the nanomole reactions can be scaled up to millimol quantities, providing good yields. The screening of the end products in the destination plates lead to an interesting compound that acts as an inhibitor of the phosphatase MptpB, a virulence factor of Mycobacterium tuberculosis. 'Until now, this class of phosphatases has been regarded as undruggable due to its highly charged active site.'

In summary, the new experiments show that the one-pot reaction with boronic acid under mild conditions at nanomole scale has a high success rate and produces good yields. 'We believe our approach will widen the accessibility of the boronic acid chemical space markedly for applications in synthesis, chemical biology, and drug discovery', says Dömling. The outcomes also demonstrate that the high-throughput method works for different chemical reactions. 'Our long-term target is to develop this into an automated system where artificial intelligence is used to refine and optimize drug candidates.' 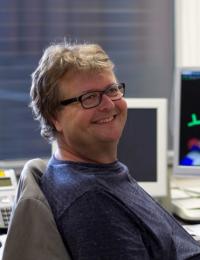