On 20 April 2010, a floating oil rig in the Gulf of Mexico called Deepwater Horizon suddenly exploded, leading to the largest accidental marine oil disaster in the world. Collaborating scientists at EPFL in Switzerland and the Woods Hole Oceanographic Institution (WHOI) in the United States have analyzed the composition of eight oil-soaked sand patties that were collected along the Gulf shores from April until November in 2011. They determined and classified the chemical composition of these oil residues, showing that they contain harmful compounds. By identifying the compounds, it is now easier to assess their effects on wildlife. The results will be published on January 22, 2014 in Environmental Science & Technology.

According to earlier studies, about 535 000 metric tons of oil gushed into the marine environment after the collapse of Deepwater Horizon, although the amount is a topic of debate in current BP court negotiations. This is the equivalent of filling 300 Olympic sized pools. Almost four years later, the Gulf ecosystem is still enduring the impact, as reports of significantly decreased seafood catches, die-offs, deformities, and reduced populations of marine wildlife continue. But the extent of the damage due to Deepwater Horizon is difficult to estimate.

When oil leaks into the marine environment, some constituents dissolve into the sea or evaporate into the atmosphere. Other compounds in the oil persist and tend to lump together. These greasy residues can collect at the bottom of the sea or float to the sea surface and wash ashore as tar balls that can be ingested or absorbed by marine wildlife. It is known that some oil constituents can cause stress, impaired reproduction, abnormal development, reduced immune function, stunted growth, or death, to many species of marine organisms, depending on the level of exposure.

A Chemical Investigation of Persisting Oil

Yet little is known about the chemical composition and ecotoxic impact of the persisting, remnant oil that may last for months or years. "Understanding the composition of long-lasting oil residues is important for fully assessing the long-term toxicological impacts on wildlife, and this cannot be ignored," says scientist Samuel Arey, who works jointly at EPFL and Eawag.

EPFL/Eawag and WHOI scientists are tackling this question by deciphering the elusive chemical composition of these oily sand patties. The toxicology of long-lived oil residues is usually overlooked because their chemical composition is difficult to elucidate. Using new laboratory and data analysis techniques, the team resolved and quantified many of the chemical constituents in these samples.

They found that these lumps of oil-soaked sand contain large amounts of water-repelling hydrocarbons known as saturates that can be classified into different sub-groups. Of the eight samples studied by the scientists, the most weathered one consisted of saturated hydrocarbons (26%), oxygenated hydrocarbons (66%), and aromatic hydrocarbons (7%).

The study targeted the most abundant compounds in the residual oil, dissecting their composition with unprecedented accuracy. This is important for understanding the environmental impact of persisting oil remnants, because ecotoxicologists have demonstrated that all three chemical groups can be harmful to living organisms. More worrisome, relatively little is known about the broader toxicity of saturates and oxygenated hydrocarbons in the marine ecosystem, like the Gulf of Mexico – where there are 223 offshore oil rigs – even though these compounds constitute most of the persisting oil. 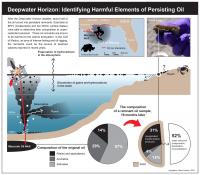