A bizarre group of uniquely shaped organisms known as rangeomorphs may have been some of the earliest animals to appear on Earth, uniquely suited to ocean conditions 575 million years ago. A new model devised by researchers at the University of Cambridge has resolved many of the mysteries around the structure, evolution and extinction of these 'proto animals.' The findings are reported today in the journal PNAS.

Rangeomorphs were some of the earliest large organisms on Earth, existing during a time when most other forms of life were microscopic in size. Most rangeomorphs were about 10 centimetres high, although some were up to two metres in height.

These creatures were ocean dwellers which lived during the Ediacaran period, between 635 and 541 million years ago. Their bodies were made up of soft branches, each with many smaller side branches, forming a geometric shape known as a fractal, which can be seen in many familiar branching shapes such as fern leaves and even river networks.

"We know that rangeomorphs lived too deep in the ocean for them to get their energy through photosynthesis as plants do," said Dr Jennifer Hoyal Cuthill of Cambridge's Department of Earth Sciences, who led the research. "It's more likely that they absorbed nutrients directly from the sea water through the surface of their body. It would be difficult in the modern world for such large animals to survive only on dissolved nutrients."

"The oceans during the Ediacaran period were more like a weak soup – full of nutrients such as organic carbon, whereas today suspended food particles are swiftly harvested by a myriad of animals," said co-author Professor Simon Conway Morris.

Starting 541 million years ago, the conditions in the oceans changed quickly with the start of the Cambrian Explosion – a period of rapid evolution when most major animal groups first emerge in the fossil record and competition for nutrients increased dramatically.

Rangeomorphs have often been considered a 'failed experiment' of evolution as they died out so quickly once the Cambrian Explosion began in earnest, but this new analysis shows just how successful they once were.

Rangeomorphs almost completely filled the space surrounding them, with a massive total surface area. This made them very efficient feeders that were able to extract the maximum amount of nutrients from the ocean water.

"These creatures were remarkably well-adapted to their environment, as the oceans at the time were high in nutrients and low in competition," said Dr Hoyal Cuthill. "Mathematically speaking, they filled their space in a nearly perfect way."

Dr Hoyal Cuthill examined rangeomorph fossils from a number of locations worldwide, and used them to make the first computer reconstructions of the development and three-dimensional structure of these organisms, showing just how well-suited they were to their Ediacaran environment.

As the Cambrian Explosion began however, the rangeomorphs became 'sitting ducks', as they had no known means of defence from predators which were starting to evolve, and the changing chemical composition of the ocean meant that they could no longer get the nutrients they required to feed.

"As the Cambrian began, these Ediacaran specialists could no longer survive, and nothing quite like them has been seen again," said Dr Hoyal Cuthill.

Reconstructions show how some of the earliest animals lived -- and died 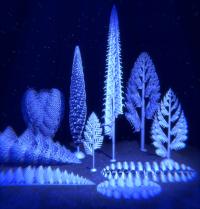 Paleontological Reconstruction of Rangeomorph Fronds (2 of 2) 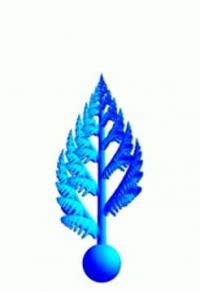 Animation of the Growth and Development of the Extinct Rangeomorph