A team of scientists in Japan has found that a DNA modification called 5hmC - thought to be involved in turning genes on and off - localizes at sites of DNA damage and repair. They also found that a family of recently discovered enzymes, called TETs for short, is important in maintaining 5hmC's reparative role.

To turn genes on or off, a methyl group can be added to or removed from DNA. During the removal of this chemical tag, called demethylation, the methyl group is converted to 5hmC as an intermediate step. The TET enzymes are thought to be critical to the demethylation process. Recent research has shown that 5hmC is associated with an "opening up" of nearby chromatin, the tightly packaged assembly of proteins and DNA in the cell nucleus.

The team reveals in the journal Cell Reports that 5hmC localizes near breaks in DNA that develop naturally or that are caused by DNA-damaging drugs or irradiation. They also found that inhibiting TET enzymes in cells resulted in a lack of 5hmC, followed by errors in chromosome separation. This suggests that TET enzymes are important for the production of 5hmC at DNA damage sites and that both play critical roles in responding to DNA damage.

The research raises the possibility that 5hmC helps to keep chromatin "open" so it can be more accessible to other DNA damage response proteins. 5hmC could be used as a marker for DNA damage, say the researchers.

"Our results imply that loss of TET enzymes and 5hmC depletion could contribute significantly to genome instability and inaccurate chromosome segregation, perhaps explaining the correlation of low 5hmC levels with cancer," say the researchers. 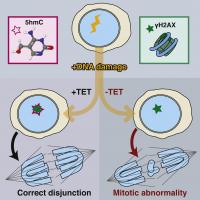