On a marble plate, measuring 40 by 60 centimetres, the name "Yehiel" can be read, followed by further letters which have not yet been deciphered. The Jena Archaeologists believe that the new discovery might be a tomb slab. Antlers, which were found very close to the tomb slab in the rubble gave a clue to the age determination. "The organic material of the antlers could be dated by radiocarbon analysis with certainty to about 390 AD," excavation leader Dr. Dennis Graen of the Jena University explains. "Therefore we have a so-called 'terminus ante quem' for the inscription, as it must have been created before it got mixed in with the rubble with the antlers."

The earliest archaeological evidence of Jewish inhabitants in the region of modern-day Portugal has so far also been a tomb slab with a Latin inscription and an image of a menorah - a seven-armed chandelier - from 482 AD. The earliest Hebrew inscriptions known until now date from the 6th or 7th Century AD.

For three years the team of the University Jena has been excavating a Roman villa in Portugal, discovered some years ago by Jorge Correia, archaeologist of the Silves council, during an archaeological survey near the village of São Bartolomeu de Messines (Silves). The project was aiming at finding out how and what the inhabitants of the hinterland of the Roman province of Lusitania lived off. While the Portuguese coast region has been explored very well, there is very little knowledge about those regions. The new discovery poses further conundrums. "We were actually hoping for a Latin inscription when we turned round the excavated tomb slab," Henning Wabersich, a member of the excavation reports. After all, no inscriptions have been found so far and nothing was known about the identity of the inhabitants of the enclosure. Only after long research the Jena Archaeologists found out which language they were exactly dealing with, as the inscription was not cut with particular care. "While we were looking for experts who could help with deciphering the inscription between Jena and Jerusalem, the crucial clue came from Spain" Dennis Graen says. "Jordi Casanovas Miró from the Museu Nacional d'Art de Catalunya in Barcelona – a well-known expert for Hebrew inscriptions on the Iberian Peninsula – is sure that the Jewish name "Yehiel" can be read, - a name that is already mentioned in the Bible."

Not only is the early date exceptional in this case, but also the place of the discovery: Never before have Jewish discoveries been made in a Roman villa, the Jena Archaelogist explains. In the Roman Empire at that time Jews usually wrote in Latin, as they feared oppressive measures. Hebrew, as on the re-discovered marble plate, only came back into use after the decline of the Roman supremacy, respectively in the following time of migration of peoples from the 6th or 7th century AD. "We were also most surprised that we found traces of Romans - romanised Lusitanians in this case - and Jews living together in a rural area of all things," Dennis Graen says. "We assumed that something like this would have been much more likely in a city."

Information about the Jewish population in the region in general was mostly passed down by scriptures. "During the ecclesiastical council in the Spanish town Elvira about 300 AD rules of conduct between Jews and Christians were issued. This indicates that at this time there must have been a relatively large number of Jews on the Iberian Peninsula already", Dennis Graen explains – but archaeological evidence had been missing so far. "We knew that there was a Jewish community in the Middle Ages not far from our excavation site in the town of Silves. It existed until the expulsion of the Jews in the year 1497."

In the summer the Jena Archaeologists will take up their work again. Until now they have excavated 160 square metres of the villa, but after checking out the ground it already became clear that the greater part of the enclosure is still covered in soil. "We eventually want to find out more about the people who lived here," Graen explains the venture. "And of course we want to solve the questions the Hebrew inscription has posed us." 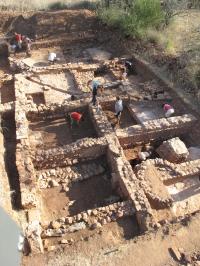