As part of the unprecedented NASA Twin study, researchers at University of California San Diego School of Medicine examined how long-term space flight affects the regulation of proteins and metabolites in the body and the implications for cardiovascular health and vision, both during and after space travel.

The NASA Twins Study is the most comprehensive integrated multi-omics, molecular, physiological, and behavioral analysis of how the human body responds to space flight to date. Study results were published in the April edition of Science.

"This first-of-its-kind investigation has provided clues about how a long duration space flight changes the regulation of molecules in the body and the relationship of these changes with physiological changes in the body due to space flight such as vascular remodeling and vision problems," said senior author Brinda Rana, PhD, professor in the Department of Psychiatry at UC San Diego School of Medicine. "Not only does the study provide insight into the body's response to space flight, by simultaneously studying the astronaut's identical twin brother who served as our 'ground control,' we captured an integrated view of the molecular, behavioral and physiological changes experienced by a middle-aged man on Earth over a two-year period."

The study consisted of 10 teams of investigators around the nation who have been observing and assessing identical twin astronauts, Scott and Mark Kelly. Scott Kelly flew aboard the International Space Station (ISS) for 342 days in 2015 and 2016 while his identical twin brother, Mark Kelly, remained on Earth.

"A primary issue that astronauts have in space is Space-Associated Neuro-ocular Syndrome or SANS," said Rana. "Many astronauts develop SANS-related vision impairment that may be the result of multiple hits on the vascular system involving microgravity-related fluid shifts, environmental changes, and possibly a genetic pre-disposition."

"Cardiovascular changes akin to atherosclerosis have also been observed in astronauts after a long duration flight. Both SANS and cardiovascular issues are major physiological hurdles which NASA wants to address before they can embark on longer space flight missions, such as the proposed mission to Mars in the 2030s."

Twin Investigators coordinated sample collection and transport from the ISS and also collected samples in Russia when Scott Kelly returned to Earth via the Russian Soyuz spacecraft.

"The challenge was to collect enough biofluids onboard the ISS at multiple time points throughout the year for all 10 investigative teams to conduct this comprehensive omics view of the human body in space," said Rana. "Blood volume drops in space and the astronauts are chronically dehydrated. These factors add to the difficulty of obtaining samples in space. Our study established protocols for collecting and transporting samples for future multi-omics studies on astronauts."

"The overall Twins Study demonstrated the resilience and robustness of how a human body can adapt to a multitude of changes induced by the spaceflight environment, such as microgravity, radiation, circadian disruption, elevated CO2, isolation from friends and family and dietary limitations," said Rana.

"The results will serve as a roadmap for future interdisciplinary studies aimed at better understanding potential health risks of long-duration missions and developing personalized countermeasures."

Other co-investigators working with Rana included Tomas Vaisar and Andy Hoofnagle at the University of Washington; Immaculata De Vivo at Harvard School of Public Health; and Stuart Lee, Brandon Macias and Mike Stenger at the Johnson Space Center. 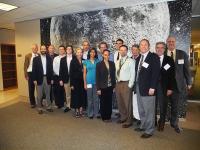