The aquatic animal known as the sponge is often described as entirely sessile: once they've settled in a spot and matured, they aren't generally thought of as moving around. But, according to a new study in the journal Current Biology on April 26--in which researchers describe mysterious trails of light brown sponge spicules (spike-like support elements in sponges) across the Arctic seafloor--that isn't always so.

"We observed trails of densely interwoven spicules connected directly to the underside or lower flanks of sponge individuals, suggesting these trails are traces of motility of the sponges," the researchers, led by Teresa Morganti of the Max Planck Institute of Marine Microbiology and Autun Purser of the Alfred Wegener Helmholtz Centre for Polar and Marine Research, write. "This is the first time abundant sponge trails have been observed in situ and attributed to sponge mobility."

It looked as though the sponges had "crawled" into their current positions. In fact, sponges do have a motile larval stage. But most species are thought to become sessile as adults. Sponges, after all, have no muscles or specialized organs for moving around. They can react to external stimulation and move a little by contracting or expanding their bodies. There also has been some evidence of movement in sponges raised in the lab. In some cases, that movement involved remodeling their whole bodies.

Nevertheless, the new findings took the research team by surprise. The discovery was made by studying video captured in 2016 by the research icebreaker Polarstern as it surveyed the submerged peaks of the permanently ice-covered Langseth Ridge.

A towed marine camera sled and a hybrid remotely operated vehicle (HROV) showed that the peaks of the ridge were covered by one of the densest communities of sponges that's ever been seen. The researchers determined that the impressive sponge populations were primarily comprised of large numbers of Geodia parva, G. hentscheli, and Stelletta rhaphidiophora individuals.

They say it's not clear, given the challenging environment, how the area supports such a vast community of sponges. But, even more intriguing were the numerous trails of sponge spicules. Far from a rarity, the researchers saw trails in nearly 70% of seafloor images that contained living sponges.

Those trails were several centimeters in height and up to many meters long. They often connected directly to living sponges. The trails were seen in areas with lots of sponges, as well as in more sparsely populated areas. The researchers report that they also often seemed to be in areas with smaller, juvenile sponges.

The researchers generated 3D models from the images and video to show the way the trails were interwoven with each other. They say that the findings suggest that the moving sponges sometimes change direction. They don't think the movement is simply a matter of gravity. In fact, the images suggest that the sponges frequently traveled uphill. It may be that the sponges move in order to get food, perhaps driven by the scarce Arctic resources.

"These features are all indicative of feeding and population density behavioral trends previously observed in encrusting sponges," the researchers write. "The extremely low primary productivity, sedimentation, and particle advection rates of the Langseth Ridge region overall result in some of the lowest standing stocks of benthic life; so potentially, this Arctic Geodia community relies on particulate and dissolved fractions from the degradation of old organic debris trapped within the spicule mat as additional food sources. We suggest that the mobility indicated here may be related to sponges searching for and feeding directly on the accumulated detrital matter trapped within the sponge spicule mat underlying the living sponges."

It's also possible that the movement has something to do with reproduction or the dispersal of young sponges. To learn more about how fast and why the sponges make these unexpected moves, they say that further time-lapse imagery and other studies are needed.

This work was supported by DFG Cluster of Excellence "The Ocean in the Earth System" at the University of Bremen from the ERC Adv Grant ABYSS, the European Union's Horizon 2020 research and innovation program, the Helmholtz Association, the Max Planck Society, and NASA. 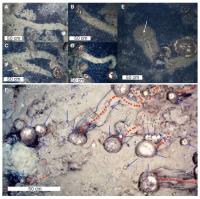