LAWRENCE -- The Solomon Islands in the southwest Pacific are best known as a locale for some of the most intense fighting of the Second World War, including the bloody Battle of Guadalcanal. But for nearly a century, the rich biodiversity of the islands has been instrumental to the study of evolution, including research by noted scientists Ernst Mayr and Jared Diamond.

"Leading ideas of how speciation happens and evolution occurs were formed based on birds and frogs in this region," said Rob Moyle, associate curator at the University of Kansas' Biodiversity Institute, who specializes in the evolution of birds. "The islands are incredibly beautiful places but also at times incredibly inhospitable, very hot with really rough terrain and torrential downpours."

Today, Moyle is leading a major research effort in the region supported by $1.3 million from the National Science Foundation to conduct fieldwork, collect museum specimens, record bioacoustics and sequence DNA of birds, reptiles, amphibians and mammals.

"We want to go back to test hypotheses, fill in gaps in the data and revisit this with much more modern methods than they were using decades ago," Moyle said. "Some of the problems doing this work today are permitting issues and national boundaries. In the past, researchers just went island to island and collected what they wanted. It's difficult to do the same thing today, but that's what we're hoping to do."

The grant includes fieldwork spread across three nations -- the Solomon Islands, New Guinea and Vanuatu. Many islands in the region are remote and isolated, making travel difficult for the researchers hoping to follow up on work performed by earlier biologists.

"Getting there isn't simple," Moyle said. "From the U.S., you have to go through Australia and fly back several hours to get to the Solomons. Very few airlines go there, but the main islands have little airstrips you get to on a little Twin Otter prop plane. To get to most small islands, you take small outboard boats. That can be iffy, because you go across some pretty open ocean crossings. Then, sometimes we take a boat up the river -- a year ago we took a helicopter to a site in Guadalcanal."

Moyle's colleagues include KU's Rafe Brown, who is in charge of amphibian and reptile work; Chris Filardi, senior scientist at Conservation International; Michael Andersen of the University of New Mexico; Tyrone Lavery of the University of Queensland, Australia; Jonathan Richmond of the U.S. Geological Survey; and many participants and collaborators in the Solomon Islands, including David Boseto, co-director of Ecological Solutions Solomon Islands, a group dedicated to environmental research and conservation.

In the field, biologists will camp in teams ranging from two to 20 people, performing their work in shifts that depend on the animals of interest.

"If you're studying birds, you're up early," Moyle said. "Our day starts before dawn, getting up, getting ready, getting tape recorders ready for vocalizations, getting nets ready -- that goes through mid-morning, then we have work back at camp to preserve and prepare specimens. If you study frogs, you go herping at night. Sometimes we overlap, the herpetologists get back late, and the bird people are getting up."

The teams will include many graduate and undergraduate students from KU and partner institutions.

"Graduate students will be heavily involved in fieldwork, lab work and publishing papers," Moyle said. "We'll also bring undergrads from the U.S. over to the Solomon Islands. They'll be paired with undergraduates from the Solomons to work on research projects -- so there's both an international cultural experience as well as a scientific project."

Back at KU's specialized labs, researchers will conduct genomic sequencing of samples from the field to establish relationships between species and determine when separate species may have branched off from each other.

"Traditionally, scientists would collect bird specimens and their insights into what went on in a region came from looking at plumage color, the size and shape of the animal, and looking at maps of where they occurred on islands, but physical appearance can be very misleading," Moyle said. "Genomic sequencing opened up new realm of inquiry, not just for figuring out if specimens A and B are related, or if A is more closely related to C, but also figuring out how quickly they diversified or how long ago they arrived in the archipelago."

Moyle and his colleagues will use a process called "high-throughput sequencing" to trace how gene flow occurs between populations separated on isolated islands.

"Sometimes, we see there are populations on different islands that look or sound very different, and, so far, we actually can't tell them apart genetically," Moyle said. "We know there are differences in there, but it shows how little change there has to be in the genome to get something that sounds and looks very different. With some of this work, we're able to identify the specific genes for differences we're seeing among the species."

Moreover, the scientists are likely to identify species that are unknown to science and describe them for the first time.

In addition to the scientific value of the research, work performed under the grant will inform policymakers and conservationists looking to protect biodiversity in the region.

"These islands are under great threat from a variety of sources," Moyle said. "The most prominent threat is logging, but there are also some very aggressive resource extractions like gold, nickel, and bauxite mines and oil drilling. Some of these islands aren't that large, and there's not much forest left, so figuring out where species are and what's left of them can give conservationists and governments some data to work with to make informed decisions." 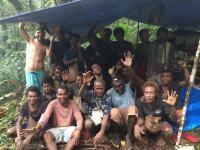 Morning in the Jungle