The next time you come across a knotted jumble of rope or wire or yarn, ponder this: The natural tendency for things to tangle may help explain the three-dimensional nature of the universe and how it formed.

An international team of physicists has developed an out-of-the-box theory which proposes that shortly after it popped into existence 13.8 billion years ago the universe was filled with knots formed from flexible strands of energy called flux tubes that link elementary particles together. The idea provides a neat explanation for why we inhabit a three-dimensional world and is described in a paper titled "Knotty inflation and the dimensionality of space time" accepted for publication in the European Physical Journal C and available on the arXiv preprint server.

"Although the question of why our universe has exactly three (large) spatial dimensions is one of the most profound puzzles in cosmology ... it is actually only occasionally addressed in the [scientific] literature," the article begins.

For a new solution to this puzzle, the five co-authors - physics professors Arjun Berera at the University of Edinburgh, Roman Buniy at Chapman University, Heinrich Päs (author of The Perfect Wave: With Neutrinos at the Boundary of Space and Time) at the University of Dortmund, João Rosa at the University of Aveiro and Thomas Kephart at Vanderbilt University - took a common element from the standard model of particle physics and mixed it with a little basic knot theory to produce a novel scenario that not only can explain the predominance of three dimensions but also provides a natural power source for the inflationary growth spurt that most cosmologists believe the universe went through microseconds after it burst into existence.

The common element that the physicists borrowed is the "flux tube" comprised of quarks, the elementary particles that make up protons and neutrons, held together by another type of elementary particle called a gluon that "glues" quarks together. Gluons link positive quarks to matching negative antiquarks with flexible strands of energy called flux tubes. As the linked particles are pulled apart, the flux tube gets longer until it reaches a point where it breaks. When it does, it releases enough energy to form a second quark-antiquark pair that splits up and binds with the original particles, producing two pairs of bound particles. (The process is similar to cutting a bar magnet in half to get two smaller magnets, both with north and south poles.)

"We've taken the well-known phenomenon of the flux tube and kicked it up to a higher energy level," said Kephart, professor of physics at Vanderbilt.

The physicists have been working out the details of their new theory since 2012, when they attended a workshop that Kephart organized at the Isaac Newton Institute in Cambridge, England. Berera, Buniy and Päs all knew Kephart because they were employed as post-doctoral fellows at Vanderbilt before getting faculty appointments. In discussions at the workshop, the group became intrigued by the possibility that flux tubes could have played a key role in the initial formation of the universe.

According to current theories, when the universe was created it was initially filled with a superheated primordial soup called quark-gluon plasma. This consisted of a mixture of quarks and gluons. (In 2005 the quark-gluon plasma was successfully recreated in a particle accelerator, the Relativistic Heavy Ion Collider at Brookhaven National Laboratory, by an international group of physicists, including three from Vanderbilt: Stevenson Chair in Physics Victoria Greene and Professors of Physics Charles Maguire and Julia Velkovska.)

Kephart and his collaborators realized that a higher energy version of the quark-gluon plasma would have been an ideal environment for flux tube formation in the very early universe. The large numbers of pairs of quarks and antiquarks being spontaneously created and annihilated would create myriads of flux tubes.

Normally, the flux tube that links a quark and antiquark disappears when the two particles come into contact and self-annihilate, but there are exceptions.

If a tube takes the form of a knot, for example, then it becomes stable and can outlive the particles that created it. If one of particles traces the path of an overhand knot, for instance, then its flux tube will form a trefoil knot. As a result, the knotted tube will continue to exist, even after the particles that it links annihilate each other. Stable flux tubes are also created when two or more flux tubes become interlinked. The simplest example is the Hopf link, which consists of two interlinked circles.

In this fashion, the entire universe could have filled up with a tight network of flux tubes, the authors envisioned. Then, when they calculated how much energy such a network might contain, they were pleasantly surprised to discover that it was enough to power an early period of cosmic inflation.

Since the idea of cosmic inflation was introduced in the early 1980s, cosmologists have generally accepted the proposition that the early universe went through a period when it expanded from the size of a proton to the size of a grapefruit in less than a trillionth of a second.

This period of hyper-expansion solves two important problems in cosmology. It can explain observations that space is both flatter and smoother than astrophysicists think it should be. Despite these advantages, acceptance of the theory has been hindered because an appropriate energy source has not been identified.

"Not only does our flux tube network provide the energy needed to drive inflation, it also explains why it stopped so abruptly," said Kephart. "As the universe began expanding, the flux-tube network began decaying and eventually broke apart, eliminating the energy source that was powering the expansion."

When the network broke down, it filled the universe with a gas of subatomic particles and radiation, allowing the evolution of the universe to continue along the lines that have previously been determined.

The most distinctive characteristic of their theory is that it provides a natural explanation for a three-dimensional world. There are a number of higher dimensional theories, such as string theory, that visualize the universe as having nine or ten spatial dimensions. Generally, their proponents explain that these higher dimensions are hidden from view in one fashion or another.

A two-dimensional example helps explain. Say you put a dot in the center of a circle on a sheet of paper. There is no way to free the circle from the dot while staying on the sheet. But if you add a third dimension, you can lift the circle above the dot and move it to one side until the dot is no longer inside the circle before lowering it back down. Something similar happens to three-dimensional knots if you add a fourth dimension - mathematicians have shown that they unravel. "For this reason, knotted or linked tubes can't form in higher-dimension spaces," said Kephart.

The net result is that inflation would have been limited to three dimensions. Additional dimensions, if they exist, would remain infinitesimal in size, far too small for us to perceive.

The next step for the physicists is to develop their theory until it makes some predictions about the nature of the universe that can be tested.

The research was supported by U.S. Department of Energy grant DE-SC0010504, the Alexander von Humboldt Foundation, The European Commission and the Portuguese Foundation for Science and Technology. 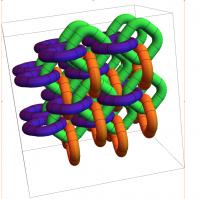