All living organisms suffer injuries. Animals and humans have movable cells, specialized in finding, approaching, and healing wounds. Plant cells, however, are immobile and can't encapsulate the damage. Instead, adjacent cells multiply or grow to fill the injury. In this precision process, each unique cell decides whether it will stretch or divide to fill the wound. Even though scientists study regeneration in plants since the mid-19th century, the cell's 'reasons' for either choice remained unclear.

Now, scientists in the group of Professor Ji?í Friml from the Institute of Science and Technology Austria (IST Austria) discovered that the hormone Auxin and pressure guide the plant's way of regenerating.

"It is incredibly fascinating how robust and flexible plant regeneration is, considering how static those organisms are," says Lukas Hoermayer, a leading scientist in this study.

To investigate wound healing, the scientists injured a thale cress root with a laser. They then tracked cells during regeneration with a microscope. The scientists found that the hormone Auxin, which is essential in plant growth and development, also plays a vital role in wound healing. It builds up in those cells directly touching the wound and facilitates the plant's response to injury.

When the scientists artificially changed the Auxin amounts, either no cells or too many cells responded to the wound. This uncoordinated process, sometimes even led to tumorous swelling of the root.

"Only the precise coordination of many cells throughout the whole tissue yields a defined and localized wound response," explains Lukas Hoermayer.

Furthermore, the team recorded a pressure change within the plant, caused by the collapsing cells of the wound. When the scientists reduced the cellular pressure before cutting the plant, the pressure difference vanished, and the regeneration was weakened.

By observing plant regeneration and modifying it with chemical treatments, the scientists identified Auxin concentration and pressure changes as governing processes. Their results advance the understanding of how roots manage to heal wounds and hence survive in sandy soil or the presence of root-attacking herbivores.

Wounded plants: How they coordinate their healing 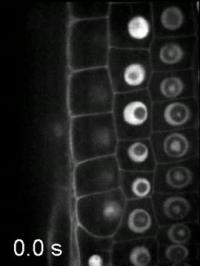