Lions belong to the world's most charismatic megafauna. However, lion numbers and range have declined alarmingly over the last two decades.

"To turn the tide, international cooperation is crucial," says a team of lawyers, conservation biologists and social scientists.

In their recently published review article in the journal Nature Conservation, they assess the current and potential future role of international treaties regarding lion conservation.

To conduct this study, international wildlife lawyers Arie Trouwborst and Melissa Lewis from Tilburg Law School in the Netherlands teamed up with lion experts David Macdonald, Amy Dickman and other scientists from the University of Oxford's Wildlife Conservation Research Unit (WildCRU) - the research group that made Cecil the lion famous.

Their analysis clearly shows the importance of various global and regional treaties for lion conservation.

For instance, dozens of important lion areas have received international protection under treaties like the World Heritage Convention and the Ramsar Wetlands Convention, whereas trade in lion bones and hunting trophies is regulated through the Convention on International Trade in Endangered Species (CITES).

"There is still much room for improvement in the way the international commitments of lion range states are applied on the ground," the review notes.

However, the authors conclude that it is worthwhile to invest in such improvements, and stress the importance of strategies involving the local people who live alongside lions. The review offers many concrete recommendations for optimising the contributions of the various treaties to lion conservation.

A particularly important recommendation is to formally list lions under the Convention on the Conservation of Migratory Species (CMS). A proposal to list lions is on the agenda of the next intergovernmental summit of the parties to the CMS in October this year.

"Listing the lion would raise the profile of this iconic species, and would moreover enable the CMS to provide a framework for coordinating and assisting conservation efforts in the 25 countries where lions still occur in the wild."

According to David Macdonald, Director of WildCRU:

"Biology is necessary, but not sufficient, to inform and deliver wildlife conservation. Our approach at the WildCRU in Oxford is holistic - this new partnership with international lawyers is a symbol of our determination to embrace knowledge from every discipline, leaving no stone unturned in our quest to conserve these iconic animals."

Trouwborst A, Lewis M, Burnham D, Dickman A, Hinks A, Hodgetts T, Macdonald E, Macdonald D (2017) International law and lions (Panthera leo): understanding and improving the contribution of wildlife treaties to the conservation and sustainable use of an iconic carnivore. Nature Conservation 21: 83-128. https://doi.org/10.3897/natureconservation.21.13690 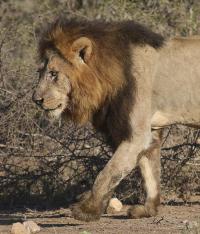