A Swansea University researcher, Alex Harold, has beaten over 5000 applicants to win an international award for her work using proteins derived from soil bacteria to develop a new anti-corrosion coating for steel.

Organised by Tata Group, the Tata Innovista competition highlights and rewards innovation within research and development, right across Tata's activity. This meant Alex's entry was up against projects from divisions such as Tata Steel Europe, Jaguar Landrover and Tata Global Beverages.

Of the 5000 entries, 51 teams were shortlisted and represented at the final in Mumbai. Alex's project was announced as the winner of the "Dare to Try" award, one of the twelve categories in the competition. Alex is a TATA Steel UK engineering doctorate student at Swansea University.

Her winning project was called 'Superhydrophobic Coatings from Bacterial Proteins'. A material that is "hydrophobic" is one that repels water - in effect, waterproof. The cells of a common soil bacteria have hydrophobic properties, and Alex used these to develop her new coating.

Dr Alex Harold explained the research behind her winning project:

"We wanted to try a coating that wasn't just inspired by nature but utilised biological components to provide a solution to an industrial problem. The cell surface of a common soil bacteria (Streptomyces sp.) is not only hydrophobic but it protects the organism from desiccation and therefore the movement of water across the cell barrier.

We extracted this biomaterial and dissolved it to create a protein solution that would self-assemble along hydrophobic / hydrophilic interfaces. Using this property, we were able to coat steel products and produce a robust protein coating that was less than 10 nanometres thick, able to withstand boiling and freezing and to reduce the potential for corrosion".

Protecting against corrosion is essential in the steel industry, which manufactures high-quality products used in sectors such as construction, packaging, aerospace and aircraft, and the car industry.

The new coating can provide a more environmentally-friendly alternative to the coatings currently used, without any loss in performance.

Alex's award is the latest example of Swansea University's expertise in steel-related research. It also illustrates the close partnership between the University and Tata, including the engineering doctorate which produces highly-skilled graduates for the steel industry.

Dr Geertje van Keulen from the Institute of Life Science at the Swansea University Medical School , academic lead on the project, said:

"Alex has managed to develop an exciting, environmentally friendly and robust application for anti-corrosion for TATA Steel. Her work has enabled us to unlock other application studies: we have recently received two research funding awards from the Defence and Security Accelerator for further development of protein-based materials for the Defence sector."

"The interdisciplinary aspect of the project has worked well, and delivered a novel concept for anticorrosion".

How soil bacteria can protect against corrosion in steel 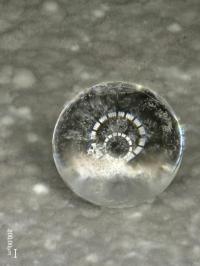 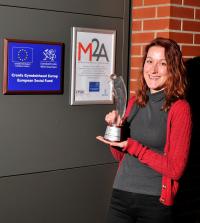