Fat body cells in Drosophila play a surprising role in sealing wounds and preventing infection, researchers at the University of Bristol report February 26 in the journal Developmental Cell. The cells, which were previously thought to be immobile, propel themselves forward toward wounds with a wormlike wave motion, rather than adhering to and pushing off of other structures like most motile cells do.

After arriving at the site of a wound, fat body cells perform several useful functions. "They work a lot harder and are more of a team player than was previously thought," says Paul Martin, who, alongside Will Wood, was one of the senior authors of the paper.

The fat cells crowd into the wound and waft debris to the edges of it, where the debris can be consumed by the immune cells. The fat cells are large enough that anywhere from one to four cells can plug the wound, playing a role similar to a clot or scab in vertebrates. The cells physically keep bacteria out of the wound while it heals, while helping increase the production of antimicrobial peptides to quell any infections. The fat cells stay at the wound site until it is healed. "Then they detach and just swim off, as though their job is done," Martin says.

But the way the cells get to the wound -- and the fact that they travel there at all -- is also surprising. The researchers were making movies of fly immune cells, called hemocytes, when they noticed giant shadows moving across the frame. "I wondered whether it might be these large fat body cells," says first author Anna Franz. "But of course, they shouldn't be moving, because fat cells aren't motile."

Except that they were. And they were moving on their own. "We had to be sure that they weren't just drifting and then sort of sticking at the wound site," says Martin. "And we had to rule out that they weren't just being sort of sucked to the wound by fluid coming out of the hole, much like if you tossed a flannel in a bath and then took the plug out." But genetically modified versions of the fat body cells with inactivated contractile proteins no longer moved to wounds, suggesting that the cells were actively migrating, rather than simply being carried around by hemolymph, the fluid inside the fly.

Whereas most cells use little spikes of actin called filopodia and lamellipodia to push and pull themselves off of other objects, the fat body cells appear to use peristaltic constriction to "swim" through the hemolymph. They don't use frictional movement at all. Instead, actin and myosin, the proteins found in our muscle fibers, constrict at the center of the cell. The constriction then moves like a wave toward the rear of the cell to propel it forward. "The reason we use the word peristaltic is because a wave of muscle constriction that moves down the esophagus is what sends bits of food down into your gut. That's called peristalsis, and that's what this looks like as it moves," says Martin.

Franz doesn't believe that the way these cells move is unique to fat body cells. But, she says, "people have mainly focused on cells that adhere to a substrate when migrating, because that's easier to observe in tissue culture." These studies make it clear that cells in vivo can move without adhering, and she hopes that they will continue to be investigated: "This is now an example where you can study it easily in an animal."

This is something that he hopes to study further in vertebrate models. There is some evidence that fat cells can aid healing in vertebrates, but so far, no one has shown vertebrate fat cells actually migrating. "But perhaps they do," he says. "Now, because of this research, it would be worth looking at them. It's not crazy to think that they might travel to a wound and do important things when they get there."

This work was supported by an MRC Programme Grant and Wellcome Trust Investigator and Fellowship Awards.

Watch fat cells help heal a wound in a fly 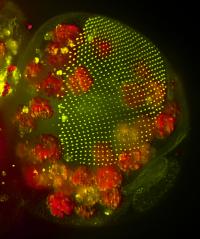