"This collaboration has been an opportunity for graduate students to work on an environmentally-friendly propellant that can be used for flight on Earth and used in long distance space missions," said NASA Chief Engineer Mike Ryschkewitsch at NASA Headquarters in Washington. "These sorts of university-led experimental projects encourage a new generation of aerospace engineers to think outside of the box and look at new ways for NASA to meet our exploration goals."

Using ALICE as fuel, a nine-foot rocket soared to a height of 1,300 feet over Purdue University's Scholer farms in Indiana earlier this month. ALICE is generating excitement among researchers because this energetic propellant has the potential to replace some liquid or solid propellants. When it is optimized, it could have a higher performance than conventional propellants.

"By funding this collaborative research with NASA, Purdue University and the Pennsylvania State University, AFOSR continues to promote basic research breakthroughs for the future of the Air Force," said Dr. Brendan Godfrey, director of AFOSR.

ALICE has the consistency of toothpaste when made. It can be fit into molds and then cooled to -30 C 24 hours before flight. The propellant has a high burn rate and achieved a maximum thrust of 650 pounds during this test.

"A sustained collaborative research effort on the fundamentals of the combustion of nanoscale aluminum and water over the last few years led to the success of this flight," said Dr. Steven F. Son, a research team member from Purdue. "ALICE can be improved with the addition of oxidizers and become a potential solid rocket propellant on Earth. Theoretically, ALICE can be manufactured in distant places like the moon or Mars, instead of being transported to distant locations at high cost."

For more information about the Air Force Office of Scientific Research, visit: http://www.wpafb.af.mil/AFRL/afosr/

For more information about NASA and agency programs, visit: http://www.nasa.gov 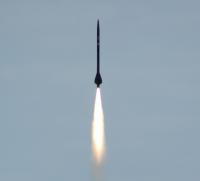