Droughts could kill off the tallest trees in tropical rainforests in coming decades, a study suggests.

For the first time, scientists have identified the ecological trigger that brings about the death of tropical rainforest trees during prolonged water shortages.

Reduced rainfall forecast in coming decades could cause the breakdown of the transport system in trees that takes water up from soil to the leaves, scientists say.

This is likely to add significantly to the amount of carbon dioxide in the atmosphere through decomposition of the dead trees. It could also mean rainforests in the future are populated by smaller trees, which store less carbon, the team says.

Until now, how trees die from drought was poorly understood. Previous research suggested that a severe lack of water might have prevented trees from making enough sugars to fuel their metabolism, causing them to starve and die.

Findings from the world's longest-running drought study in tropical rainforest show that it is breakages in the trees' water transport system that lead to their death -- rather than starvation. The results suggest that the Amazon rainforest is not resistant to intense droughts, or to long-term drought.

Over a 13-year period, researchers carried out fieldwork to assess the impact of drought on trees in the Amazon. Using a large-scale drought experiment, they monitored growth, sugar levels and the performance of the water transport system in the trees.

The researchers found that the amount of sugars stored in trees experiencing drought for more than a decade was similar to those in trees which had normal amounts of water during the same period. Drought-affected trees were found to grow at a normal rate right up until they died, indicating that they had enough sugars to fuel their metabolism and that starvation was not the trigger for death.

The study, led by the University of Edinburgh, shows that during severe drought, air bubbles can enter the sap of trees and break columns of water inside the tissues that transport water and nutrients -- known as xylem. The tallest trees are most vulnerable to this process which can then lead to death; smaller trees are more likely to survive, the team says.

Dr Lucy Rowland, of the University of Edinburgh's School of GeoSciences, and first author of the study, said: "Tropical forests play a key role influencing global and regional climate, and understanding the way rainforest trees respond to long-term changes in their environment is essential for improving predictions of the impacts of climate change." 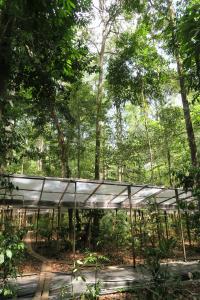 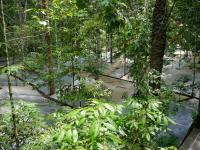