Tropical storm Manuel may have dissipated, but the storm dropped very heavy rainfall along Mexico's Pacific coast where 21 people have been reported killed due to flooding and landslides caused by extreme rainfall. At the same time, on Sept. 16, Hurricane Ingrid weakened to a tropical storm and came ashore from the Gulf of Mexico into the state of Tamaulipas near La Pesca, Mexico, soaking that side of the country.

A TRMM-based, near-real time Multi- satellite Precipitation Analysis (MPA) created at the NASA Goddard Space Flight Center in Greenbelt, Md. is used to monitor rainfall over the global tropics. MPA rainfall totals were created for eastern Mexico for the period of September 9 through 16, 2013 when Manuel was dropping heavy rainfall along Mexico's Pacific coast. The TRMM data showed that the highest rainfall totals for tropical storm Manuel of over 350mm (~14 inches) occurred along the Pacific coast.

According to reports from the Associated Press, Tropical Storm Manuel's rains flooded streets and the airport in Acapulco, forcing it to close down. Highways were also cut off from landslides. 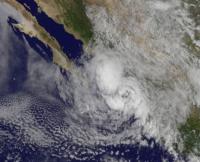