A chameleon-like reptile that lived some 200 million years ago had an incredibly unique forelimb apparently adapted for digging, according to a report published in the Cell Press journal Current Biology on September 29. The bones of their forelimbs show a highly unusual shape along with a massive, hooked claw.

The findings in the reptile known as Drepanosaurus shed light on the evolution of all four-footed animals (or tetrapods), the researchers say.

"Effectively, Drepanosaurus has done away with two rules that had seemed to constrain tetrapod limbs," says Adam Pritchard of Stony Brook University. "The radius and ulna are perpendicular to one another due to the latter's unique shape, and the carpal [wrist] bones are large and very elongated."

The forelimbs of tetrapods are known for their versatility of function. They've been modified in different species for use in walking, digging, specialized grasping, flying, and swimming. Even so, Pritchard and colleagues explain, the structural relationships between the bones of the forelimb have remained largely unchanged throughout the group's 375-million-year history, with parallel radius and ulna adjoining a series of shorter carpal bones.

Researchers who studied the first and only other Drepanosaurus specimen ever found previously recognized the uniqueness of the forelimb bones. But the fossil evidence had been crushed and distorted, making it difficult to make any firm conclusions.

In the new work, Pritchard and his colleagues examined dozens of Drepanosaurus forelimb bones collected from the Hayden Quarry in New Mexico. They were able to reconstruct the three-dimensional form that those bones took and the places where muscles attached. They also inferred the range of motion the reptiles' forelimbs had.

The researchers report that Drepanosaurus had extremely large surfaces for muscles that would have flexed and extended the hand and claws. The limb bones also suggest a strong ability to pull the limb forward and backward. The claws were long, wide, and prominently hinged. And then there's that massive second claw.

The new findings support the earlier proposed notion that the forelimbs of Drepanosaurus were similar to those of modern-day anteaters.

"Anteaters use a special kind of digging called 'hook-and-pull digging,'" Pritchard says. "In this action, the animal will powerfully insert its enlarged claw into a substrate and then powerfully pull back the entire forelimb. The motions and musculature indicated by the New Mexico Drepanosaurus bones were well suited to hook-and-pull digging over 150 million years before the first known anteaters!"

Pritchard says that despite the strangeness of the Drepanosaurus forelimb, they do have some sense as to how it most likely evolved. The closest relative of Drepanosaurus, a drepanosaurid named Megalancosaurus, has a subtly asymmetric ulna and slightly elongated wrist bones, he explains. In other words, some of the modifications to the Drepanosaurus forearm seem to predate the major changes to the claws.

The researchers say they are continuing to excavate the quarries in New Mexico. Stay tuned for more intriguing discoveries ahead. 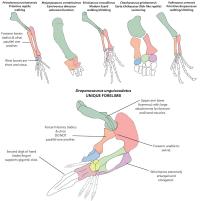