New research into the impact of climate change has found that warming oceans will cause profound changes in the global distribution of marine biodiversity.

In a study published in the journal Nature Climate Change an international research team modelled the impacts of a changing climate on the distribution of almost 13 thousand marine species, more than twelve times as many species as previously studied.

The study found that a rapidly warming climate would cause many species to expand into new regions, which would impact on native species, while others with restricted ranges, particularly those around the tropics, are more likely to face extinction.

Co-author, Professor John Pandolfi from the ARC Centre of Excellence for Coral Reef Studies at the University of Queensland says global patterns of species richness will change significantly, with considerable regional variability.

"This study was particularly useful because it not only gave us hope that species have the potential to track and follow changing climates but it also gave us cause for concern, particularly in the tropics, where strong biodiversity losses were predicted," says Professor Pandolfi.

"This is especially worrying, and highly germane to Australia's coral reefs, because complementary studies have shown high levels of extinction risk in tropical biotas, where localized human impacts as well as climate change have resulted in substantial degradation."

To model the projected impact of climate change on marine biodiversity, the researchers used climate-velocity trajectories, a measurement which combines the rate and direction of movement of ocean temperature bands over time, together with information about thermal tolerance and habitat preference.

They say the analysis provides the simplest expectation for the future distribution of marine biodiversity, showing recurring spatial patterns of high rates of species invasions coupled with local extinctions.

The researchers say this will make currently distinct ecological communities much more similar to each other in many regions by the end of the century.

"Above all, this study shows the broad geographic connections of the effects of climate change - conservation efforts need to be facilitated by cooperation among countries to have any real chance of combating the potentially severe biodiversity losses that a changing climate might impose." 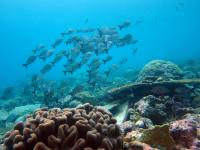 Fish in the Phillipines