The familiar smell of beer is due in part to aroma compounds produced by common brewer's yeast. Now, researchers reporting in the Cell Press journal Cell Reports on October 9th have discovered why the yeast (formally known as S. cerevisiae) make that smell: the scent attracts fruit flies, which repay the yeast by dispersing their cells in the environment.

Yeast lacking a single aroma gene fail to produce their characteristic odor, and they don't attract fruit flies either.

"Two seemingly unrelated species, yeasts and flies, have developed an intricate symbiosis based on smell," said Kevin Verstrepen of KU Leuven and VIB in Belgium. "The flies can feed on the yeasts, and the yeasts benefit from the movement of the flies."

Verstrepen first got an idea that this might be going on about 15 years ago as a graduate student studying how yeast cells contribute to the flavor of beer and wine. He discovered that yeast cells produce several pleasing aroma compounds similar to those produced by ripening fruits. It turns out that one yeast gene in particular, called ATF1 for alcohol acetyl transferase, was responsible for the lion's share of those volatile chemicals.

An accidental escape hinted at what those scents might be good for: "When returning to the lab after a weekend, I found that a flask with a smelly yeast culture was infested by fruit flies that had escaped from a neighboring genetics lab, whereas another flask that contained a mutant yeast strain in which the aroma gene was deleted did not contain any flies," Verstrepen recalls.

But it wasn't until years later, when he teamed up with fruit fly neurobiologists Emre Yaksi and Bassem Hassan, that the story finally came together.

Using a combination of molecular biology, neurobiology and behavioral tests, the researchers now show that loss of ATF1 changes the response of the fruit fly brain to a whiff of yeast. As a result, the flies are much less attracted to the mutant yeast cells, which in turn results in reduced dispersal of mutant yeast by the flies.

Together, the results uncover an intriguing aroma-based communication and mutualism between microbes and insects, the researchers say. They suspect that similar mechanisms may exist in other plant-associated microbes, including pathogens.

In fact, the research team has isolated many different yeast species from the bodies of fruit flies in nature to find that the vast majority of those yeasts produce aroma compounds. They have also isolated several strong aroma-producing yeasts from flowers.

"These preliminary results suggest that aroma production is not restricted to S. cerevisiae and may be a much more general theme in microbe-insect interactions," the researchers write.

Thanks, fruit flies, for that pleasing beer scent 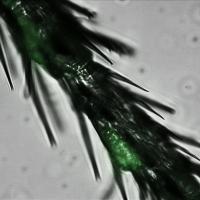 Fluorescent Yeast Cells Present on the Legs of Flies 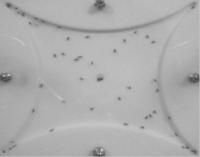