Now, thanks to Arizona State University researcher Zackary Graham and his colleagues, we can add the "unicorn of the seas," the narwhal, to the list.

"Broadly, I'm interested in sexual selection, which is responsible for creating some of the craziest traits in biology. As an evolutionary biologist, I try to understand why some animals have these bizarre traits, and why some don't," said Graham, a doctoral student at ASU's School of Life Sciences.

"One way we try to understand these traits is by looking at the morphology, or the size and shape of them. I immediately became obsessed with trying to think of some interesting animals to study. I was Googling everything; maybe I can find a dinosaur in a museum. Eventually, I found the narwhal tusk."

Graham is the lead author of a new study which demonstrates the best evidence to date that the narwhal tusk functions as a sexual trait, published in online in the journal Biology Letters DOI: http://dx.doi.org/10.1098/rsbl.2019.0950 or URL https://royalsocietypublishing.org/doi/10.1098/rsbl.2019.0950

A tusk among us

Like walruses and elephants, male narwhals (Monodon monoceros) grow tusks; these are modified teeth. In narwhals, the left tooth erupts from their head, reaching more than 8-feet-long in some individuals. The tusk grows out in a spiral pattern, giving the appearance of a sea-dwelling unicorn.

Since narwhals spend most of their lives hidden under the Arctic ice, there has been much speculation on what exactly the tusk is used for: hunting, fighting or perhaps something more amorous in nature?

Graham mentions that there have been reports of head scarring, broken tusks and tusks impaled in the sides of males, who may have been on the receiving end of some aggression. Other scattered observations include a behavior of "tusking," where two narwhals cross and rub their tusks together, suggests that the tusk is used for communication during intra- or intersexual interactions.

Graham has studied sexual selection in all sorts of species, including the crayfish he studies for his PhD dissertation. He realized, that to demonstrate that the tusk is sexually selected, he could use the relationship between tusk size with body size to understand this mysterious trait. To do so, his team collected morphology data on 245 adult male narwhals over the course of 35 years.

With colleagues Alexandre V. Palaoro of the LUTA do Departamento de Ecologia e Biologia Evolutiva, UNIFESP, Brazil, and Mads Peter Heide-Jørgensen and Eva Garde, from the Greenland Institute of Natural Resources, they created a large dataset from the carefully curated narwhal field data.

When comparing individuals of the same age, sexually selected traits often exhibit disproportional growth --- that is, for a given body size, sexually selected traits are often larger than expected in the largest individuals. Importantly, they compared the growth (or scaling) of the tusk to the scaling relationship between body size and a trait that is unlikely to have sexual functions. To do so, they used the tail of the narwhals, called the fluke.

"We also predicted that if the narwhal tusk is sexually selected, we expect greater variation in tusk length compared to the variation in fluke width," said Graham. This is because many sexual traits are highly sensitive to nutrient and body condition, such that only the biggest and strongest individuals can afford the energy to produce extremely large traits.

According to Graham, they found that male tusks can have over 4-fold variation in tusk length (the same body size males can have tusks ranging from 1.5-feet to 8.2-feet) long. However, the fluke hardly varies at all, ranging from 1.5-feet to 3-feet long within individuals of the same body size. They also found disproportional growth in the tusk compared to the fluke. Based on the disproportional growth and large variation in tusk length they found, they have provided the best evidence to date that narwhal tusks are indeed sexually selected.

"By combining our results on tusk scaling with known material properties of the tusk, we suggest that the narwhal tusk is a sexually selected signal that is used during the male-male tusking contests," said Graham. "The information that the tusk communicates is simple: "I am bigger than you.""

And if only the highest quality males produce and adorn the largest tusks, then the tusk likely serves as an honest signal of quality to females or males.

Graham hopes that future researchers will use aerial and aquatic drones to provide concrete evidence of the tusk function in nature and elucidate the tusks exact role as either an aggressive weapon, a sexual signal or both.

Perhaps one day, we can look forward to a "Big Love: Narwhals Under the Ice" nature documentary coming to an IMAX near you.

"Overall, our evidence supports the hypothesis that the tusk functions both as a sexually selected weapon and sexually selected signal during male-male contests," said Graham. "However, further evaluations of the narwhal's ecology are warranted."

For narwhals, the 'unicorn of the seas,' size matters for sexual selection 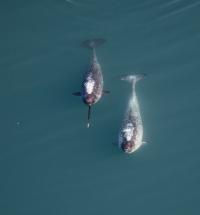 A Blessing of Narwhals