In an interdisciplinary research project carried out at Tel Aviv University, researchers from the School of Plant Sciences affiliated with the George S. Wise Faculty of Life Sciences collaborated with their colleagues from the Sackler Faculty of Medicine in order to study the course of plant root growth. The plant researchers were aided by a computational model constructed by cancer researchers studying cancer cells, which they adapted for use with plant root cells.

The fascinating and groundbreaking findings: For the first time in the world, it has been demonstrated, at the resolution of a single cell, that the root grows with a screwing motion - just like a drill penetrating a wall. In the wake of this study, the cancer researchers conjecture that cancer cells, too, are assisted by a spiral motion in order to penetrate healthy tissue in the environment of the tumor, or to create metastases in various organs of the body.

The research was led by Prof. Eilon Shani from the School of Plant Sciences and Food Security and Prof. Ilan Tsarfaty from the Department of Clinical Microbiology and Immunology at Tel Aviv University, and was conducted in collaboration with researchers from the USA, Austria and China. The article was published in March 2021 in the acclaimed journal Nature Communications.

The researchers in Prof. Shani's group, led by Dr. Yangjie Hu, used as a model the plant known as Arabidopsis. They marked the nuclei of the root cells with a fluorescent protein and observed the growing process and movement of the cells at the root tip through a powerful microscope - approximately 1000 cells in each movie. Furthermore, in order to examine what causes and controls the movement, they focused on a known hormone named auxin, which regulates growth in plants. They built a genetic system that enables activation of auxin production (like a switch) in a number of selected cells-types, and then monitored the influence of the on/off mechanism, in four dimensions - the three spatial dimensions and the dimension of time. After each instance of auxin biosynthesis, each of the thousand cells was video recorded for a period of 6 to 24 hours, thus an enormous amount of data accumulated.

For the next stage, the researchers were aided by the computational tools provided by Prof. Tsarfaty, which had been developed in his laboratory for the purpose of monitoring the development of cancerous growths. They used these tools to analyze the imaging data obtained in the study. Thus they were actually able, for the first time, to observe with their own eyes the corkscrew movement of the root, as well as to precisely quantify and chart some 30 root growth parameters relating to time and space - including acceleration, length, changes in cell structure, coordination between cells during the growth process and velocity - for each one of the thousand cells at the root tip. Using fluorescent reporters, the findings even allowed them to precisely assess the movement and the influence of the auxin on the root, and the way in which it controls the growth process.

Prof. Shani: "Plants present special challenges to researchers. For example, half of the plant (the hidden half), namely, the root system, is buried beneath the ground. The computational tools that were developed for cancer research have enabled us, for the first time, to precisely measure and quantify the kinetics of growth and to reveal the mechanisms that control it at the resolution of a single cell. By this they have significantly advanced plant research, an area of utmost importance for society - both from an environmental point of view and in terms of agriculture and feeding the population."

Prof. Shani adds: "In the course of our study we discovered a fascinating phenomenon that had not been previously observed 'live': we saw that the cells at the root tip move in a spiral motion, like a drill penetrating the earth. We also recognized that the hormone auxin controls the screwing process of the root tip. We learned and measured the directions of the auxin hormone's movement, passing from one cell to another in the root, in order to control the growth of the root and the corkscrew motion."

Prof. Tsarfaty adds: "This was a synergetic collaboration that benefited and enlightened both parties. In plants, processes take place much more rapidly, and therefore constitute an excellent model for us. In consequence of the findings provided by this plant study, we are presently examining the possibility of a similar screw-like motion in cancer cells and in metastases, in the course of their penetration into adjacent healthy tissues."

A pioneering study: Plant roots act like a drill

Single-cell nuclei tracking of the root meristem and elongation zones. 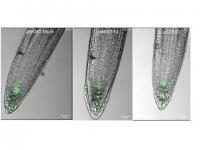