To find out more about birds such as the black-tailed godwit, ecologists have been conducting long-term population studies using standardized information on reproductive behaviour--such as dates of egg-laying or hatching and levels of chick survival. New information gathered using geolocators on godwits in the Netherlands shows that traditional observation methods can lead to inaccurate data. The study was published in the April-issue of the Journal of Avian Biology.

PhD student Mo Verhoeven from the University of Groningen used geolocators attached to the legs of black-tailed godwits to follow their migration pattern. 'These consist of a tiny chip that records light intensity every five minutes, together with the exact date and time,' explains Verhoeven. This combination allows him to determine longitude and latitude from the times of sunrise and sunset. Geolocators can collect data for up to 26 months and the information is read after removal of the chip.

Geolocators are generally used to learn about where birds migrate to and when they migrate. However, for this study, Verhoeven used the geolocators in a different way. 'During the nesting season, the geolocators registered shaded periods during the day,' says Verhoeven. This happens when a bird is sitting on a nest, with its legs folded under its body. 'We were, therefore, able to determine when these birds were nesting.' This was interesting. Accurate data on nesting is difficult to obtain since every observation of a nesting bird will also disturb its behaviour.

The main revelation from Verhoeven's analysis is that the godwits in this study always started a second nest if their first nest failed. 'So far, estimates of this re-nesting varied from 20 to 45 percent,' says Verhoeven. Based on traditional observation techniques, many of these second attempts were previously thought to be first nests, or they were not discovered at all. 'During the season, our observations shifted focus from detecting nests to following the development of chicks,' explains Verhoeven. His data also mean that counting nests to estimate the breeding population is not very accurate since many birds build a second nest.

The study also revealed a firm final date for re-nesting attempts: after 18 May, no godwit built another nest if its previous clutch failed. 'There is something really cool here,' says Verhoeven. 'Back in 1954, a biologist experimented by destroying godwit nests. He noticed that they would not re-nest after 20 May, which is almost the same date! It is really intriguing that there is such a strict end to the nesting season. What causes it? That's something I would like to find out.'

The fact that these birds make a second attempt after their first clutch is lost means that the breeding season for godwits is longer than previously thought. That has consequences for conservation. 'These second attempts are on average less successful than the first clutches,' says Verhoeven. 'But they are not trivial.' In conservation areas, farmers delay mowing the meadows in which the birds nest until some time in June. 'But the young from the second attempts may still be there with their parents in early July.'

By re-purposing the information from the geolocators, Verhoeven and his colleagues revealed an unknown part of godwit life. 'This also confronts us with our very limited understanding of the ecology of these birds and the bias in our observations,' he says. This is succinctly described by the team at the end of the article in the Journal of Avian Biology: 'Ultimately, part of the magic of ecology is its complexity and our permanent inability to fully understand that complexity.'

Revealed: the secret life of godwits 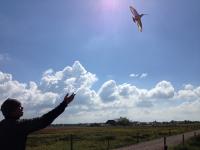