New robot technology leads Antarctic exploration into a new epoch. It is now possible to study the underside of sea ice across large distances and explore a world previously restricted to specially trained divers only.

Splash. A Weddell seal weighing almost 500 kg lands inside the tent and blocks the hole laboriously sawn out by researchers in the two-metre-thick ice to launch drones under the sea ice. The tent is lovely and warm. Small petroleum ovens provide heat to keep the hole free from ice. Outside the Antarctic sea ice stretches for miles around and the thermometer shows -15 degrees. The seal finally glides back into the water foraging for more fish and the researchers have access to the open water. The advanced technology drone is carefully lowered into the icy cold sea.

Working here (right next to the old hut used by polar explorer Robert Falcon Scott in the Antarctic winter) are researchers Lars Chresten Lund Hansen, Brian Sorrell and PhD student Bibi Ziersen, Aarhus University, along with their colleagues from Australia and New Zealand. They are developing and testing a new method to map the distribution of ice algae on the underside of the sea ice in Antarctica.

The tent covers a hole in the ice measuring 3m x 1m, and the researchers send their torpedo-shaped underwater drone down through the hole to map the underside of the sea ice. Making the hole takes most of a day and requires a major equipment package with an oil burner and steam drill.

"The drone was actually designed to study the sea bed and map factors such as sediment types, but our Australian colleagues modified the drone so that it now looks up towards the bottom of the sea ice and measures the light coming through the ice with a radiometer," says Associate Professor Lars Chresten Lund Hansen, Aarhus University.

Ice algae on the underside of the ice absorb light at certain wavelengths, and the radiometer measures how much or how little light is absorbed at these wavelengths. Based on the light measurements, the researchers can calculate the amount of algal biomass under the ice, and thereby get an idea of where the ice algae are located and how many there are. The drone follows a pre-programmed course and it maps the distribution of ice algae over very large areas where studies have not previously been possible.

An important part of the project is controlling the drone's measurements by conventional methods where ice cores are drilled out. The algae are scraped off the underside of the cores and a chlorophyll measurement reveals the number of algae. The chlorophyll figures are subsequently compared with the drone's radiometer measurements.

The aim of these investigations is to understand which factors regulate the distribution of the algae. There are some indications that the rough texture on the underside of the ice plays an important role in the algal colonisation of the sea ice. On the underside of some areas of the ice, there are thin plate-like ice crystals protruding 5 to 10 centimetres out of the bottom. The crystals are wedged between each other, forming a large surface that provides a good habitat for the diatoms that make up the bulk of the ice algae community.

Ice algae are the Antarctic's harbingers of spring

The Antarctic is completely white above the ice, but there is an abundance of colour below the ice. The small greenish-brown unicellular diatoms can grow into large colonies that form entire mats on the underside of the ice.

Ice algae are an important component of the Antarctic ecosystem. They begin to grow under the ice as soon as the Sun emerges in early spring, and survive on the small amount of sunshine that penetrates the compact layers of ice. They are also the year's first producers of food for krill and other zooplankton in the food chain. They get life going so to speak under the ice, where small creatures can frolic in the hanging garden and feast on the algae and bacteria associated with algal life.

"The ice algae account for 15-20% of the primary production in the Antarctic sea ice area. They're particularly important because they utilise the weak light in spring, when there are no other primary producers to provide food and energy for the rest of the food chain," explains Associate Professor Brian Sorrell, Aarhus University.

There are promising signs from the initial data provided by the underwater drone, and the plan is to extend the project to Arctic locations in the coming field season - either at Station North in Greenland or north of Svalbard on the research vessel R/V Lance.

Lars Chresten Lund Hansen and his colleagues used a GoPro camera to record the launching of the underwater drone and the seal's visit. See the video on Youtube: http://youtu.be/FJfNdP9NDyQ 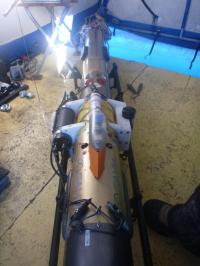 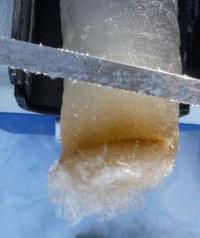