COLUMBIA, Mo. – Every community in America has its share of parks. However, park amenities in certain communities can be lacking, which can be detrimental to the health of potential patrons. Now, a University of Missouri researcher has found that while more parks exist in lower-income neighborhoods, they tend to be less attractive than parks in upper- and middle-class neighborhoods, which have more amenities and are more visually pleasing.

"Parks are important for physical activity and socialization among community members," said Sonja Wilhelm Stanis, assistant professor in the Department of Parks, Recreation and Tourism at MU. "However, our research suggests that resources are not always distributed equitably."

In the study, which was completed in Kansas City, Mo., the research team found that lower-income areas had more parks, but fewer amenities such as playgrounds. Parks in high-minority areas had more basketball courts and fewer trails while middle-class areas had more aesthetic features such as water features or decorative landscaping. Wilhelm Stanis completed the study with Katherine Vaughan from Kansas State University and Andrew Kaczynski, assistant professor at the University of South Carolina.

"Sidewalks are an important predictor of how much exercise the local population engages in and how safely and easily patrons can access resources in the neighborhood," Kaczynski said. "The absence of such amenities around parks should not be ignored."

According to previous research, sidewalks in lower income areas tend to be more uneven and often have obstructions making them difficult to access. Quality concerns and fewer aesthetic features can lead to poorer perceptions and actual problems related to park attractiveness and safety, which can deter park visitation and use, Wilhelm Stanis said.

"Previous studies show that certain features, such as playgrounds and trails, are important for physical activity," she said. "We do believe that more research is needed to examine how disparities in park environments are associated with activity levels and health outcomes."

The study reviewed 219 parks in four counties, covering 313 square miles in the Kansas City, Mo. region. Following the study, Wilhelm-Stanis said that the Kansas City Parks and Recreation Department have added playgrounds and trails to numerous parks through the region, including those in low income neighborhoods. The study was published in Annals of Behavioral Medicine, a journal of the Society of Behavioral Medicine.

The Department of Parks, Recreation and Tourism is located in the School of Natural Resources at MU.

Park amenities differ according to income of neighborhoods 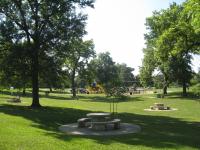 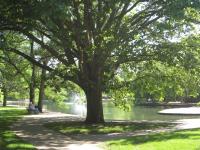