The Arecibo Observatory in Puerto Rico is following an asteroid approaching Earth this week and while it poses no threat, it appears to know our planet is facing a pandemic.

"The small-scale topographic features such as hills and ridges on one end of asteroid 1998 OR2 are fascinating scientifically," says Anne Virkki, head of Planetary Radar at the observatory, "But since we are all thinking about COVID-19 these features make it look like 1998 OR2 remembered to wear a mask."

The National Science Foundation facility, which is managed by the University of Central Florida, has a team of experts who monitors near-Earth asteroids. This asteroid is in a special class of near-Earth asteroids called Potentially Hazardous Objects (PHOs).

PHOs are bigger than 140 meters (about 500 feet) and come within 5 million miles of Earth's orbit. No known PHO poses an immediate danger to the Earth, but observations like those conducted at the Arecibo Observatory are used to determine their future trajectories.

"The radar measurements allow us to know more precisely where the asteroid will be in the future, including its future close approaches to Earth," says Flaviane Venditti, a research scientist at the observatory. "In 2079, asteroid 1998 OR2 will pass Earth about 3.5 times closer than it will this year, so it is important to know its orbit precisely."

"Although this asteroid is not projected to impact Earth, it is important to understand the characteristics of these types of objects to improve impact-risk mitigation technologies," Virkki says.

The Arecibo data confirmed that 1998 OR2 is approximately 2 kilometers (1.2 miles) across in size and rotates once every 4.1 hours, as was suggested by observations made with optical telescopes. Should an asteroid be discovered that posed an impact threat to Earth, knowing such characteristics would be important for planning a response.

The team began observations on April 13 and will continue to collect data through April 23 when the asteroid will no longer be visible from the facility. The asteroid will make its closest approach to Earth on April 29 when it will still be 16 times farther than the distance to the Moon.

Although the pandemic has impacted operations around the world, Arecibo continues its important contributions to science and to planetary defense. Radio astronomy observations can largely be made remotely, with only limited on-site observing. However, planetary radar operations cannot be run fully remotely, requiring at least one radar operator and one scientist on site. The team of scientists and telescope operators on site have been adhering to health and safety guidelines, limiting the number of observing scientists at the telescope and wearing masks during the observations.

UCF manages the NSF facility under a cooperative agreement with Universidad Ana G. Méndez and Yang Enterprises, Inc. The Arecibo Planetary Radar Program is fully supported by NASA's Near-Earth Object Observations Program in NASA's Planetary Defense Coordination Office through grant no. 80NSSC19K0523 awarded to UCF. Arecibo has played a role in analyzing NEOs since the mid-90s, observing 60-120 objects per year. Congress made NEOs a priority when it directed NASA in 2005 to discover and characterize at least 90 percent of near-Earth objects larger than 140 meters by 2020.

Funder
NASA and NSF both support the Arecibo Observatory 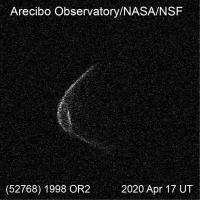