We do fine with the 21 per cent oxygen in the air around us. But sometimes we need oxygen in higher concentrations; for example lung patients must carry heavy oxygen tanks, cars using fuel cells need a regulated oxygen supply. Perhaps one day in the future even sunlight-driven “reversible” fuel cells will be made. With these we will have to separate oxygen from hydrogen in order to recombine them in order to get energy.

Now Professor Christine McKenzie (center in photo) and postdoc Jonas Sundberg, Department of Physics, Chemistry and Pharmacy at the University of Southern Denmark have synthesized a material that absorb oxygen in large quantities and store it.

"In the lab, we saw how this material took up oxygen from the air around us”, says Christine McKenzie.

The new material is crystalline, and using x-ray diffraction the researchers have studied the arrangement of atoms inside the material when it was filled with oxygen, and when it was emptied of oxygen.

Oxygen comes and goes in many places

The fact that a substance can react with oxygen is not surprising. Lots of substances do this - and the result is not always desirable: Food can go rancid when exposed to oxygen. On the other hand a wine’s taste and aroma is changed subtly when we aerate it - but not with too much oxygen! Our bodies cannot function if we do not breathe.

"An important aspect of this new material is that it does not react irreversibly with oxygen - even though it absorbs oxygen in a so-called selective chemisorptive process. The material is both a sensor, and a container for oxygen - we can use it to bind, store and transport oxygen - like a solid artificial hemoglobin", says Christine McKenzie.

A bucket full (10 litres) of the material is enough to suck up all the oxygen in a room.

"It is also interesting that the material can absorb and release oxygen many times without losing the ability. It is like dipping a sponge in water, squeezing the water out of it and repeating the process over and over again", Christine McKenzie explains.

Once the oxygen has been absorbed you can keep it stored in the material until you want to release it. The oxygen can be released by gently heating the material or subjecting it to low oxygen pressures.

“We see release of oxygen when we heat up the material, and we have also seen it when we apply vacuum. We are now wondering if light can also be used as a trigger for the material to release oxygen – this has prospects in the growing field of artificial photosynthesis", says Christine McKenzie.

The key component of the new material is the element cobalt, which is bound in a specially designed organic molecule.

"Cobalt gives the new material precisely the molecular and electronic structure that enables it to absorb oxygen from its surroundings. This mechanism is well known from all breathing creatures on earth: Humans and many other species use iron, while other animals, like crabs and spiders, use copper. Small amounts of metals are essential for the absorption of oxygen, so actually it is not entirely surprising to see this effect in our new material", explains Christine McKenzie.

Depending on the atmospheric oxygen content, temperature, pressure, etc. it takes seconds, minutes, hours or days for the substance to absorb oxygen from its surroundings. Different versions of the substance can bind oxygen at different speeds. With this complexity it becomes possible to produce devices that release and/or absorb oxygen under different circumstances – for example a mask containing layers of these materials in the correct sequence might actively supply a person with oxygen directly from the air without the help of pumps or high pressure equipment.

"When the material is saturated with oxygen, it can be compared to an oxygen tank containing pure oxygen under pressure - the difference is that this material can hold three times as much oxygen," says Christine McKenzie.

"This could be valuable for lung patients who today must carry heavy oxygen tanks with them. But also divers may one day be able to leave the oxygen tanks at home and instead get oxygen from this material as it “filters” and concentrates oxygen from surrounding air or water. A few grains contain enough oxygen for one breath, and as the material can absorb oxygen from the water around the diver and supply the diver with it, the diver will not need to bring more than these few grains”.

The material has been designed and synthesized at University of Southern Denmark. Some of the gas uptake measurements have been made with special equipment by colleagues at the University of Sydney, Australia.

This press release has been corrected October 1st at 16.15 PM.

See a film about the new material here: http://www.youtube.com/watch?v=gJbG9FvgX0U&feature=youtu.be 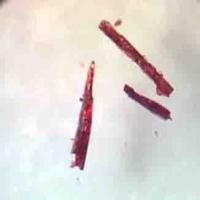