An international team of astronomers have found a huge and ancient black hole which was powering the brightest object early in the universe.

Team member Dr Fuyan Bian, from the Research School of Astronomy and Astrophysics at the Australian National University (ANU), said the discovery challenges theories of how black holes form and grow in the early universe.

"Forming such a large black hole so quickly is hard to interpret with current theories," he said.

A quasar is an extremely bright cloud of material in the process of being sucked into a black hole. As the material accelerates towards the black hole it heats up, emitting an extraordinary amount of light which actually pushes away material falling behind it.

This process, known as radiation pressure, is thought to limit the growth rate of black holes, Dr Bian said.

"However this black hole at the centre of the quasar gained enormous mass in a short period of time," Dr Bian said.

The team led by Xue-Bing Wu at Peking University, China, selected the quasar from the Sloan Digital Sky Survey of over 500 million objects in the northern skies, because of its distinctive red colour. They then followed up with three other telescopes to study the object in detail.

Dr Bian expects more surprising objects will be discovered during the Skymapper survey of the southern skies, currently being run by the ANU.

"Skymapper will find more of these exciting objects. Because they are so luminous we can see further back in time and can use them to explore the early universe," Dr Bian said. 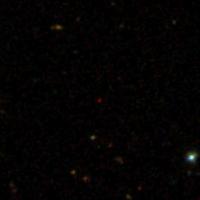