NASCAR has nothing on cancer cells when it comes to exploiting the power of drafting, letting someone else do the hard work of moving forward while you coast behind.

Building on the relatively new discovery that metastatic cancer cells leave tumors and travel in clusters, not singles, a Vanderbilt University team of biomedical engineers learned the process is aided by leader-follower behavior. Like racecar drivers and geese, the front cell expends vastly more energy making its way forward through tissue to establish a new tumor site. When it tires, it moves to the back of the cluster, and a cell from behind that's been saving energy begins leading.

The finding gives a boost to the field of metabolomics, the next big thing in fighting cancer, said Cynthia Reinhart-King, Cornelius Vanderbilt Professor of Engineering. It can complement immunotherapies, which use the body's natural defenses to kill cancer cells. So far, researchers have applied the field to slowing tumor growth, but learning about mechanisms such as the one Reinhart-King's team found can help apply it to metastasis.

"Our work is the first to say, in addition to proliferation, migration is also energy-demanding," she said. "That means we can also target migration through metabolism. Our experiments used breast cancer cells, but the same mechanism holds true to lung, colorectal, skin and other cancers, so the underlying research is vital to learning how we might defeat all of those."

The FDA approved the first-in-class cancer metabolism drug in 2017.

The Vanderbilt team's findings appear Monday, March 25, in the Proceedings of the National Academy of Sciences in a paper titled, "Energetic regulation of coordinated leader-follower dynamics during collective invasion of breast cancer cells."

The team worked using breast cancer cells in three-dimensional, created tissue. The lead author on the paper, postdoctoral associate Jian Zhang, also developed computational models that demonstrated the energy needs of the leader cell vs. the followers. The leader needed up to 50 percent more energy, depending on the density of the tissue it was fighting through, and the cells switched leader-follower positions every two to eight hours, Zhang said.

Reinhart-King said the development of fluorescent biosensors allowed for her team's research, because the engineers could track energy consumption and production within cells.

Like racecars and geese, cancer cells draft their way to new tumor sites 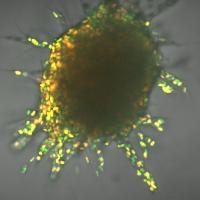