Mountain glaciers have long been a favorite poster child of climate change. The near-global retreat of glaciers of the last century provides some of the most iconic imagery for communicating the reality of human-driven climate change.

But the scientific basis for their retreat has been less clear. Glaciers respond slowly to any climate changes, they are susceptible to year-to-year variations in mountain weather, and some of the largest are still catching up after the end of the Little Ice Age. Scientists can connect climate change to the overall retreat of glaciers worldwide, but linking an individual glacier's retreat to climate change has remained a subject of debate.

The last report from the Intergovernmental Panel on Climate Change concluded only that it was "likely" that a "substantial" part of mountain glacier retreat is due to human-induced climate change -- a much weaker conclusion than for temperature and other things.

Now, using statistical techniques to analyze 37 mountain glaciers around the world, a University of Washington study finds that for most of them the observed retreat is more than 99 percent likely due to climate change. In the climate report's wording, it is "virtually certain" that the retreat of these mountain glaciers is due to climate change over the past century.

"Because of their decades-long response times, we found that glaciers are actually among the purest signals of climate change," said Gerard Roe, a UW professor of Earth and space sciences. He is corresponding author of the study published Dec. 12 in Nature Geoscience, and presented this week at the American Geophysical Union's annual fall meeting in San Francisco.

The new study analyzes specific glaciers with a history of length observations, and nearby weather records of temperature and precipitation. The authors also sought different glacier locations, focusing on roughly seven glaciers in each of five geographic regions: North America, Europe, Asia, Scandinavia and the Southern Hemisphere.

"We evaluate glaciers which are hanging on at high altitudes in the deserts of Asia as well as glaciers that are being beaten up by midlatitude storms in maritime climate settings," Roe said. "The thickness, slope and area of the glaciers are different, and all of those things affect the size of the glacier length fluctuations."

Co-authors are Florian Herla , an undergraduate student at the University of Innsbruck in Austria, and Marcia Baker, a UW professor emeritus of atmospheric sciences and Earth and space sciences.

The authors used statistical tools to compare the natural, weather-induced variations in a glacier's length with its observed changes over the last 130 years, and establish a signal-to-noise ratio. They then use that to calculate the probability that observed retreats would have happened without any background change in the climate.

The iconic Hintereisferner Glacier in Austria has retreated 2.8 km (1.75 miles) since 1880. Results show that climate change is extremely likely to be responsible for its retreat, with the probability that the changes are natural variations being less than 0.001 percent, or one in 100,000.

Likewise, for the well-known Franz Josef Glacier in New Zealand, even though the glacier has experienced re-advances of up to 1 kilometer (0.6 miles) in a given decade, there is a less than 1 percent chance that natural variations could explain the overall 3.2 kilometers (2 miles) retreat in the last 130 years.

The least significant retreats among the glaciers studied were for Rabots Glacier in northern Sweden, and South Cascade Glacier in Washington state, with probabilities of 11 and 6 percent, respectively, that their retreats might be natural variability.

"South Cascade is at the end of the Pacific storm track, and it experiences a high degree of wintertime variability. Average wintertime snowfall generates about 3 meters (10 feet) of ice per year, whereas for glaciers in desert Asia, ice accumulation might be as low as 10 centimeters (4 inches) per year," Roe said. "So they're experiencing very different climate settings. As a result, their variability, and also their sensitivity to climate change, varies from place to place."

The method uses a signal-to-noise ratio that relies on observational records for glacier length, local weather, and the basic size and shape of the glacier, but does not require detailed computer modeling. The technique could be used on any glacier that had enough observations.

Overall, the results show that changes in the 37 glaciers' lengths are between two and 15 standard deviations away from their statistical means. That represents some of the highest signal-to-noise ratios yet documented in natural systems' response to climate change.

"Even though the scientific analysis arguably hasn't always been there, it now turns out that it really is true -- we can look at these glaciers all around us that we see retreating, and see definitive evidence that the climate is changing," Roe said. "That's why people have noticed it. These glaciers are stunningly far away from where they would have been in a preindustrial climate." 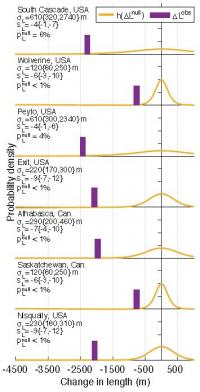 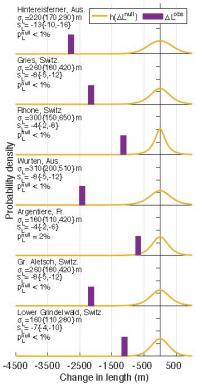