The first record of flower visitation in a group of fruit flies from Himalayan India and a total of four new species are described in the open access journal ZooKeys. In their paper, scientists also revise the descriptions of all representatives of this genus (Lordiphosa) in India.

Following a number of observations in Nainital and Darjeeling, India, the team of Dr Rajendra S. Fartyal and Pradeep C. Sati, both affiliated with HNB Garhwal University, Sushmika Pradhan, and Rabindra N. Chatterjee of University of Calcutta, Prof. M.J. Toda of Hokkaido University, and Mukul C. Kandpal and Birendra K. Singh of Kumaon University conclude that two of the new species visit the flowers of spiked ginger lily and angel's trumpet.

The distributional range of the genus stretches from the tropics of the Oriental to the subarctic of the Palearctic region, with the highest species richness in the subtropics of the Orient. However, these fruit flies have been thought to be poorly represented in India with only seven species recorded so far.

Until now, the fruit flies in the genus Lordiphosa have been known to breed on herbaceous plants. Their larvae are either leaf miners, or feed on decayed leaves and stems.

The specimens used in the present study have been collected from four different hill stations in the Himalayan region in India. These localities are covered with dense mixed-deciduous subtropical forests. They are characterised with extremely moist conditions due to the heavy rainfall during the summer monsoon season.

The authors note that one of the revised species, named L. neokurokawai, has an extraordinary type of sex comb -- a male-specific morphological feature composed of thick comb-like structures and located on the foreleg. This adaptation is only seen in two fruit fly genera. It is used in a variety of ways in tactile interactions between males and females during both courtship and mating.

The scientists point out that this finding is important when considering the evolution of the sex comb in the genus Lordiphosa. It is suggested that the sex comb has once evolved in an ancestor of the genus, and proceeded to rapidly diversify through sexual selection. However, "this hypothesis requires further investigation," the authors say. 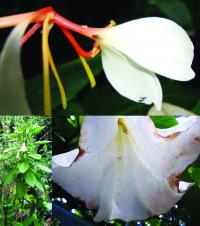