Mammals sweat to regulate body temperature, and researchers from Shanghai Jiao Tong University in China are exploring whether our phones could do the same. In a study published January 22 in the journal Joule, the authors present a coating for electronics that releases water vapor to dissipate heat from running devices--a new thermal management method that could prevent electronics from overheating and keep them cooler compared to existing strategies.

"The development of microelectronics puts great demands on efficient thermal management techniques, because all the components are tightly packed and chips can get really hot," says senior author Ruzhu Wang, who studies refrigeration engineering at Shanghai Jiao Tong University. "For example, without an effective cooling system, our phones could have a system breakdown and burn our hands if we run them for a long time or load a big application."

Larger devices such as computers use fans to regulate temperature. However, fans are bulky, noisy, and energy consuming and thus unsuitable for smaller devices like mobile phones. Manufactures have been using phase change materials (PCMs), such as waxes and fatty acids, for cooling in phones. These materials can absorb heat produced by devices when they melt. However, the total amount of energy exchanged during the solid-liquid transition is relatively low.

In contrast, the liquid-vapor transition of water can exchange 10 times the energy compared to that of PCM solid-liquid transition. Inspired by mammals' sweating mechanism, Wang and his team studied a group of porous materials that could absorb moisture from the air and release water vapor when heated. Among them, metal organic frameworks (MOFs) were the most promising because they could store a large amount of water and thus take away more heat when heated.

"Previously, researchers have tried to use MOFs to extract water from the desert air," Wang says. "But MOFs are still really expensive, so large-scale application isn't really practical. Our study shows electronics cooling is a good real-life application of MOFs. We used less than 0.3 grams of material in our experiment, and the cooling effect it produced was significant."

The team selected a type of MOFs called MIL-101(Cr) for the experiment because of its good water-absorbing capacity and high sensitivity to temperature changes. They coated three 16-square-centimeter aluminum sheets with MIL-101(Cr) of different thicknesses--198, 313, and 516 micrometers, respectively--and heated the them on a hot plate.

The team found that MIL-101Cr coating was able to delay the temperature rise of the sheets, and the effect increased with coating thickness. While an uncoated sheet reached 60°C after 5.2 minutes, the thinnest coating doubled the time and didn't reach the same temperature until 11.7 minutes. The sheet with the thickest coating reached 60°C after 19.35 minutes of heating.

"In addition to effective cooling, MIL-101(Cr) can quickly recover by absorbing moisture again once the heat source is removed, just like how mammals rehydrate and ready to sweat again," Wang says. "So, this method is really suitable for devices that aren't running all the time, like phones, charging batteries and telecommunications base stations, which can get overloaded sometimes."

To investigate the cooling effect of MIL-101(Cr) on actual devices, Wang and his team tested a coated heat sink on a microcomputing device. Compared to an uncoated heat sink, the coated one reduced the chip temperature by up to 7°C when the device was run at heavy workloads for 15 minutes.

Looking forward, the team plans to improve the material's thermal conductivity. "Once all the water is gone, the dried coating will become a resistance that affects devices' heat dissipation" says first author Chenxi Wang. Incorporating thermal conductive additives such as graphene into the material may help address the problem, he says.

Before manufacturers can install this cooling system onto our phones, cost is a major issue, Ruzhu Wang says. "By finding MOFs a practical application, we hope to increase the market demand for them and encourage more research on MOFs to bring down the costs."

This work was supported by the Foundation for Innovative Research Groups of the National Natural Science Foundation of China. 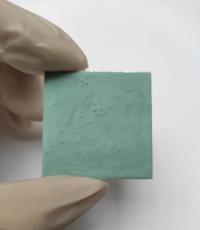