A new wonder material that can generate hydrogen, produce clean water and even create energy.

Science fiction? Hardly, and there's more - It can also desalinate water, be used as flexible water filtration membranes, help recover energy from desalination waste brine, be made into flexible solar cells and can also double the lifespan of lithium ion batteries. With its superior bacteria-killing capabilities, it can also be used to develop a new type of antibacterial bandage.

Scientists at Nanyang Technological University (NTU) in Singapore, led by Associate Professor Darren Sun have succeeded in developing a single, revolutionary nanomaterial that can do all the above and at very low cost compared to existing technology.

This breakthrough which has taken Prof Sun five years to develop is dubbed the Multi-use Titanium Dioxide (TiO2). It is formed by turning titanium dioxide crystals into patented nanofibres, which can then be easily fabricated into patented flexible filter membranes which include a combination of carbon, copper, zinc or tin, depending on the specific end product needed.

Titanium dioxide is a cheap and abundant material, which has been scientifically proven to have the ability to accelerate a chemical reaction (photocatalytic) and is also able to bond easily with water (hydrophilic).

More than 70 scientific papers on Prof Sun's work in titanium dioxide has been published in the last five years, the latest being papers published in Water Research, Energy and Environmental Science, and Journal of Materials Chemistry.

Prof Sun, 52, from NTU's School of Civil and Environmental Engineering, said such a low-cost and easily produced nanomaterial is expected to have immense potential to help tackle ongoing global challenges in energy and environmental issues.

With the world's population expected to hit 8.3 billion by 2030, there will be a massive increase in the global demand for energy and food by 50 per cent and 30 per cent for drinking water (Population Institute report, titled 2030: The "Perfect Storm" Scenario).

"While there is no single silver bullet to solving two of the world's biggest challenges: cheap renewable energy and an abundant supply of clean water; our single multi-use membrane comes close, with its titanium dioxide nanoparticles being a key catalyst in discovering such solutions," Prof Sun said. "With our unique nanomaterial, we hope to be able to help convert today's waste into tomorrow's resources, such as clean water and energy."

How the wonder material was found

While developing the membrane, Prof Sun's team also discovered that it could act as a photocatalyst, turning wastewater into hydrogen and oxygen under sunlight while still producing clean water. Such a water-splitting effect is usually caused by Platinum, a precious metal that is both expensive and rare.

"With such a discovery, it is possible to concurrently treat wastewater and yet have a much cheaper option of storing solar energy in the form of hydrogen so that it can be available any time, day or night, regardless of whether the sun is shining or not, which makes it truly a source of clean fuel," said Prof Sun.

"As of now, we are achieving a very high efficiency of about three times more than if we had used platinum, but at a much lower cost, allowing for cheap hydrogen production. In addition, we can concurrently produce clean water for close-to-zero energy cost, which may change our current water reclamation system over the world for future liveable cities."

Hydrogen is a clean fuel which can be used for automotive fuel-cells or in power plants to generate electricity.

This discovery, which was published recently in the academic journal, Water Research, showed that a small amount of nanomaterial (0.5 grams of titanium dioxide nanofibres treated with copper oxide), can generate 1.53 millilitre of hydrogen in an hour when immersed in one litre of wastewater. This amount of hydrogen produced is three times more than when Platinum is used in the same situation.

Depending on the type of wastewater, the amount of hydrogen generated can be as much as 200 millilitres in an hour. Also to increase hydrogen production, more nanomaterial can be used in larger amounts of wastewater.

This discovery was published recently in last month's journal of Energy and Environmental Science. This is the first such report of TiO2 nanofibres and particles used in forward osmosis membrane system for clean water production and energy generation.

With its anti-microbial properties and low cost, the membrane can also be used to make breathable anti-bacterial bandages, which would not only prevent infections and tackle infection at open wounds, but also promote healing by allowing oxygen to permeate through the plaster.

The membrane's material properties are also similar to polymers used to make plastic bandages currently sold on the market.

Prof Sun's research projects have shown out that when treated with other materials or made into another form such as crystals, titanium dioxide can have other uses, such as in solar cells.

By making a black titanium dioxide polycrystalline sheet, Prof Sun's team was able to make a flexible solar-cell which can generate electricity from the sun's rays.

Concurrently, Prof Sun has another team working on developing the black titanium dioxide nanomaterial to be used in Lithium ion batteries commonly used in electronic devices.

Preliminary results from thin coin-like lithium ion batteries, have shown that when titanium dioxide sphere-like nanoparticles modified with carbon are used as the anode (negative pole), it can double the capacity of the battery. This gives such batteries a much longer lifespan before it is fully drained. The results were featured prominently in a highly respected Journal of Materials Chemistry on its cover page last year.

Prof Sun and his team of 20, which includes 6 undergraduates, 10 PhD students and 4 researchers, are now working to further develop the material while concurrently spinning off a start-up company to commercialise the product.

They are also looking to collaborate with commercial partners to speed up the commercialisation process.

A research-intensive public university, Nanyang Technological University (NTU) has 33,500 undergraduate and postgraduate students in the colleges of Engineering, Business, Science, and Humanities, Arts, & Social Sciences. It has a new medical school, the Lee Kong Chian School of Medicine, set up jointly with Imperial College London.

Besides the main Yunnan Garden campus, NTU also has a satellite campus in Singapore's science and tech hub, one-north, and a third campus in Novena, Singapore's medical district. 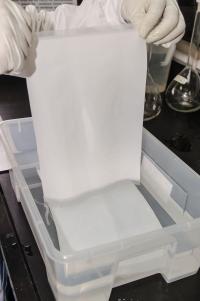