TEMPE, Ariz. – Evidence of early humans living on the coast in South Africa, harvesting food from the sea, employing complex bladelet tools and using red pigments in symbolic behavior 164,000 years ago, far earlier than previously documented, is being reported in the Oct. 18 issue of the journal Nature. The international team of researchers reporting the findings include Curtis Marean, a paleoanthropologist with the Institute of Human Origins at Arizona State University and three graduate students in the School of Human Evolution and Social Change.

“Our findings show that at 164,000 years ago in coastal South Africa humans expanded their diet to include shellfish and other marine resources, perhaps as a response to harsh environmental conditions,” notes Marean, a professor in ASU’s School of Human Evolution and Social Change. “This is the earliest dated observation of this behavior.”

Further, the researchers report that co-occurring with this diet expansion is a very early use of pigment, likely for symbolic behavior, as well as the use of bladelet stone tool technology, previously dating to 70,000 years ago.

These new findings not only move back the timeline for the evolution of modern humans, they show that lifestyles focused on coastal habitats and resources may have been crucial to the evolution and survival of these early humans.

After decades of debate, paleoanthropologists now agree the genetic and fossil evidence suggests that the modern human species – Homo sapiens – evolved in Africa between 100,000 and 200,000 years ago.

Yet, archaeological sites during that time period are rare in Africa. And, given the enormous expanse of the continent, where in Africa did this crucial step to modern humans occur"

“Archaeologists have had a hard time finding material residues of these earliest modern humans,” Marean says. “The world was in a glacial stage 125,000 to 195,000 years ago, and much of Africa was dry to mostly desert; in many areas food would have been difficult to acquire. The paleoenvironmental data indicate there are only five or six places in all of Africa where humans could have survived these harsh conditions.”

In seeking the “perfect site” to explore, Marean analyzed ocean currents, climate data, geological formations and other data to pin down a location where he felt sure to find one of these progenitor populations: the Cape of South Africa at Pinnacle Point.

“It was important that we knew exactly where to look and what we were looking for,” says Marean. This type of research is expensive and funding is competitive. Marean and the team of scientists who set out to Pinnacle Point to search for this elusive population, did so with the help of a $2.5 million grant from the National Science Foundation’s Human Origins: Moving in New Directions (HOMINID) program.

The Middle Stone Age, dated between 35,000 and 300,000 years ago, is the technological stage when anatomically modern humans emerged in Africa, along with modern cognitive behavior, says Marean. When, however, within that stage modern human behavior arose is currently debated, he adds.

“This time is beyond the range of radiocarbon dating, yet the dates on the finds published here are more secure than is typical due to the use of two advanced and independent techniques,” Marean says.

Uranium series dates were attained by Bar-Matthews on speleothem (the material of stalagmites), and optically stimulated luminescence dates were developed by Jacobs. According to Marean, the latter technique dates the last time that individual grains of sand were exposed to light, and thousands of grains were measured.

Migrating along the coast

“Generally speaking, coastal areas were of no use to early humans – unless they knew how to use the sea as a food source” says Marean. “For millions of years, our earliest hunter-gatherer relatives only ate terrestrial plants and animals. Shellfish was one of the last additions to the human diet before domesticated plants and animals were introduced.”

Before, the earliest evidence for human use of marine resources and coastal habitats was dated about 125,000 years ago. “Our research shows that humans started doing this at least 40,000 years earlier. This could have very well been a response to the extreme environmental conditions they were experiencing,” he says.

“We also found what archaeologists call bladelets – little blades less than 10 millimeters in width, about the size of your little finger,” Marean says. “These could be attached to the end of a stick to form a point for a spear, or lined up like barbs on a dart – which shows they were already using complex compound tools. And, we found evidence that they were using pigments, especially red ochre, in ways that we believe were symbolic,” he describes.

Archaeologists view symbolic behavior as one of the clues that modern language may have been present. The earliest bladelet technology was previously dated to 70,000 years ago, near the end of the Middle Stone Age, and the modified pigments are the earliest securely dated and published evidence for pigment use.

Results reporting early use of coastlines are especially significant to scientists interested in the migration of humans out of Africa. Physical evidence that this coastal population was practicing modern human behavior is particularly important to geneticists and physical anthropologists seeking to identify the progenitor population for modern humans.

“This evidence shows that Africa, and particularly southern Africa, was precocious in the development of modern human biology and behavior. We believe that on the far southern shore of Africa there was a small population of modern humans who struggled through this glacial period using shellfish and advanced technologies, and symbolism was important to their social relations. It is possible that this population could be the progenitor population for all modern humans,” Marean says. 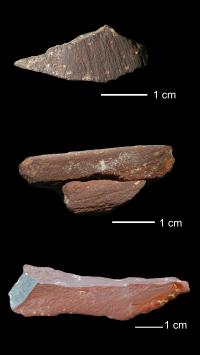 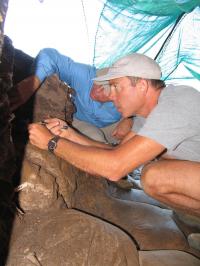