A newly discovered endemic species of melanistic black iguana (Iguana melanoderma), discovered in Saba and Montserrat islands, the Lesser Antilles (Eastern Caribbean), appears to be threatened by unsustainable harvesting (including pet trade) and both competition and hybridization from escaped or released invasive alien iguanas from South and Central America. International research group calls for urgent conservation measures in the article, recently published in the open-access journal ZooKeys.

The newly described species is characterised with private microsatellite alleles, unique mitochondrial ND4 haplotypes and a distinctive black spot between the eye and the ear cavity (tympanum). Juveniles and young adults have a dorsal carpet pattern, the colouration is darkening with aging (except for the anterior part of the snout).

It has already occurred before in Guadeloupe that Common Green Iguana displaced the Lesser Antilles iguanas through competition and hybridization which is on the way also in the Lesser Antilles. Potentially invasive common iguanas from the Central and South American lineages are likely to invade other islands and need to be differentiated from the endemic melanistic iguanas of the area.

The IUCN Red List lists the green iguana to be of "Least Concern", but failed to differentiate between populations, some of which are threatened by extinction. With the new taxonomic proposal, these endemic insular populations can be considered as a conservation unit with their own assessments.

"With the increase in trade and shipping in the Caribbean region and post-hurricane restoration activities, it is very likely that there will be new opportunities for invasive iguanas to colonize new islands inhabited by endemic lineages," shares the lead researcher prof. Frédéric Grandjean from the University of Poitiers (France).

Scientists describe the common melanistic iguanas from the islands of Saba and Montserrat as a new taxon and aim to establish its relationships with other green iguanas. That can help conservationists to accurately differentiate this endemic lineage from invasive iguanas and investigate its ecology and biology population on these two very small islands that are subject to a range of environmental disturbances including hurricanes, earthquakes and volcanic eruptions.

"Priority actions for the conservation of the species Iguana melanoderma are biosecurity, minimization of hunting, and habitat conservation. The maritime and airport authorities of both islands must be vigilant about the movements of iguanas, or their sub-products, in either direction, even if the animals remain within the same nation's territory. Capacity-building and awareness-raising should strengthen the islands' biosecurity system and could enhance pride in this flagship species," concludes Prof. Grandjean.

The key stakeholders in conservation efforts for the area are the Dutch Caribbean Nature Alliance (DCNA), the Saba Conservation Foundation (SCF), the Montserrat National Trust (MNT) and the UK Overseas Territories Conservation Forum (UKOTCF), which, the research team hope, could take measures in order to protect the flagship insular iguana species, mainly against alien iguanas. 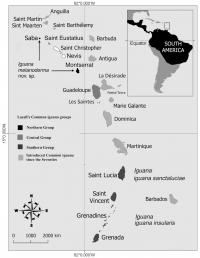