An international collaboration involving scientists in Tenerife, the US and the UK, are using Diamond Light Source, the UK's national synchrotron to investigate the effect of gravity on rocky planets. They will be examining three billion+ year old rocks from the Moon collected during the Apollo missions, as well as meteorites from Mars, Vesta, and other environments collected in Antarctica.

The assembled team are going to test the hypothesis that a key mechanism in the genesis and evolution of magma relies upon gravity to physically separate crystals from where they formed in a melt, and into mushes at the bottom of magma bodies. This mechanism should not operate in zero gravity, but should operate to varying degrees on rocky bodies. They are able to conduct this research because of the equipment and real-time analytical capabilities available at Diamond.

The results may be extrapolated to help model the conditions on and inside larger planets, which could provide us more information about prioritising research on exoplanets and the search for life.

This will be the second visit to Diamond for Dr Matt Pankhurst. He explains;

"At our previous visit, we used a new imaging technique developed at Diamond to carry out 3D mapping of olivine - a common green mineral found in the Earth's sub-surface and in these Moon and other rock samples. These maps informed our understanding of how gravity affects geological processes and help to understand those on larger planets and other rocky bodies."

In magma, the ratio of iron to magnesium in olivine changes over timeframes ranging from hours to months, and these changes are 'locked in' to the mineral as the magma cools. Accurate 3D images of the iron distribution within olivine in the Moon and other samples will 'unlock' information about the magmatic processes in which they formed. Dr Pankhurst continues:

"Volcanic rocks start forming underneath the surface and finish forming once they've erupted and fully frozen. What we are aiming to reconstruct from these rock samples is information such as what the patterns of magma flow within the volcanic system were, what the magma storage duration was like, and potentially even identify eruption triggers. The data will be analysed using state-of-the-art diffusion modelling which will establish the history of individual crystals."

The team previously examined samples from the Apollo 12 and 15 missions, using an advanced X-ray speckle imaging technique developed on Beamline B16 at Diamond Light Source. This time they will use Beamline I12 to produce high resolution computer tomography images of the samples. Dr Robert Atwood, Beamline Scientist on I12 adds:

"Beamline I12 offers a large, monochromatic, single wavelength, X-ray beam with selectable photon energies between 53 and 150 keV. Such a beam can penetrate through dense samples like the moon rocks and meteorites being studied by Dr. Pankhurst's team. The absorption of X-rays by materials depends on the X-ray photon energy. By scanning the samples with a single photon energy beam, the X-ray absorption characteristics of the minerals in the samples can be determined, providing information on the local chemistry. We have also developed a special helical tomographic scanning technique with improved data quality, which is important for the mineralogical studies of these precious specimens."

Dr. Pankhurst continues; "Nearly 50 years after the first humans landed on the Moon, there is still a lot we don't know about how the Moon formed, and the nature of lunar volcanic activity. We know that, on Earth, volcanic eruptions can be triggered (or ended) by changes in magma (molten rock) in or beneath the planet's crust. Chemical records in crystals can be used to tell us about the physical dynamics inside the magma leading up to an eruption. All physical dynamics are subject to gravity, so looking at chemical records in crystals that formed under different gravity gives us not only an insight to the evolution of rocky planets, but also a valuable baseline to interpret terrestrial records. By accessing the dynamics of magmas from the past, the aim is to build a library of what happens before an eruption, which will support more accurate forecasts of future eruptions."

NASA has approved the use of 18 lunar samples for these experiments, and similar, well-characterised terrestrial samples have also been scanned, and used to verify the chemical composition of olivine. Samples are loaned to scientists who wish to study them, a process overseen by NASA's Apollo sample curator, Ryan Zeigler. As a scientist who understands the trade-off between studying the samples and preserving them, a balance must be struck in experiment design. These decisions are becoming easier as we develop more powerful, non-destructive techniques. He comments:

"The researchers are now using state-of-the-art diffusion modelling to establish the history of individual crystals of olivine from 3D images. These techniques will be applied to the new data gathered during this beamtime. The results will add to our understanding of lunar and planetary formation, topics which have been continually debated since the samples were first returned to Earth."

Diamond has a huge amount of experience of investigating priceless heritage items and gaining new insights from them. Using these techniques, we could study the UK's Moon rock samples in new ways, and these fresh images would give them more meaning and inspire the next generation of scientists and engineers. 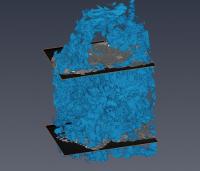 3D Slice of a Moon Rock Scan from Diamond 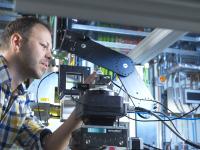