Patients suffering from chronic pancreatitis experience an either recurring or permanent inflammation of their pancreas. "In many cases, people develop this disease because they are drinking too much alcohol or they are smoking too much. Certain medication or high levels of lipids or calcium in a patient's blood can be another cause of pancreatitis," explained Heiko Witt, one of the two heads of the study and Professor for Pediatric Nutritional Medicine at the Else Kröner-Fresenius-Zentrum (EKFZ) at TUM.

The main focus of previous research was on the so-called acinus cells of the pancreas; these are responsible for creating digestive enzymes. Many patients suffering from genetically caused pancreatitis show mutations in digestive enzymes or in molecules inhibiting the enzymes' effectiveness.

In the course of the current study, that was performed with European and Japanese patients suffering from pancreatitis not associated with alcohol consumption, the researchers discovered that genetic defects which were heavily limiting the functionality of calcium channel TRPV6 caused early-onset chronic pancreatitis.

"A substantial TRPV6 defect is a globally occurring and serious risk factor for developing chronic pancreatitis," said Professor Witt and added: "By identifying alterations of the calcium channel, we are now also considering duct cells as part of the concept covering the origins of this disease." Duct cells serve as coating in the channels that transport digestive enzymes from the point of origin into the intestines.

Using a mouse model, the scientists were able to show that the absence of the corresponding gene would, in most cases, lead to inflammation and the occurrence of fibrotic changes in the pancreas, which is typical for chronic inflammation.

The discovery that a calcium channel malfunction can contribute to the development of pancreatitis offers a new course of action for therapeutic intervention. Furthermore, the research findings will become part of the standard diagnostics for genetically caused pancreatitis.

These insights also pave the way for a new area of research covering the investigation of causes of pancreatitis - no longer focused on acinus cells and digestive enzymes but rather on duct cells and channels as well as calcium metabolism.

The identification of mutations in a calcium channel as a (contributing) cause of disease leads to new factors - other calcium channels and proteins that are relevant for calcium metabolism - moving into the scientific focus. "Currently we are investigating these genes for genetic alterations and we have a European patient collective comprising 1100 people with pancreatitis to gather our data," reported Professor Witt.

A disease trigger for pancreatitis has been identified 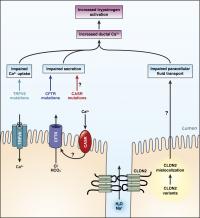