NASA's Aqua satellite captured an image of Typhoon Maysak as it strengthened into a super typhoon on March 31, reaching Category 5 hurricane status on the Saffir-Simpson Wind Scale. The TRMM and GPM satellites, both satellites are co-managed by NASA and the Japan Aerospace Exploration Agency captured rainfall and cloud data that revealed heavy rainfall and high thunderstorms in the strengthening storm.

On March 31, in Micronesia a typhoon warning is in effect for Yap, Fais and Ulithi in Yap State. For updated warnings visit: http://www.prh.noaa.gov/data/GUM/HLSPQ1. Currently, there are no warnings in the Philippines.

The Tropical Rainfall Measuring Mission (TRMM) satellite has been collecting valuable scientific data since November 1997. Early on March 30, the satellite collected rainfall data as it flew directly above Maysak at 04:14 UTC (12:14 a.m. EDT) when maximum sustained winds were near 85 knots (98 mph). Rainfall data was collected by TRMM's Microwave Imager (TMI) and Precipitation Radar (PR) instruments and showed heaviest rainfall southwest of the center, and in fragmented bands of thunderstorms northeast of the center. In both of those places rainfall was in excess of 50 mm/2 inches per hour.

A little over eight hours later at 12:25 UTC (8:25 a.m. EDT) the Global Precipitation Measurement or GPM core observatory satellite captured rainfall data on Maysak. GPM rainfall data was combined with reflectivity data from GPM's Radar (Ku Band) to provide a 3-D image of Maysak's storm top heights. The Ku Band radar data sliced through the western side of the typhoon and showed that a few intense storms on this side of Maysak were reaching heights close to 16 km (9.9 miles)

Maysak is moving west-northwest through Yap State in Micronesia, and is continuing to strengthen. The JTWC forecast calls for Maysak to peak at 155 knots (178.4 mph/ 287.1 kph) in one or two days' time, before a weakening trend commences. Maysak is currently forecast to make landfall in Luzon sometime on April 5 as a typhoon. 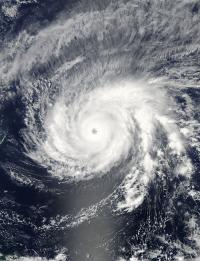 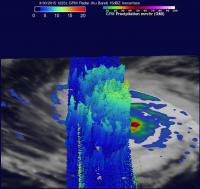