WEST LAFAYETTE, Ind. - Climate change could provide the warmer weather pests prefer, leading to an increase in populations that feed on corn and other crops, according to a new study.

Warmer growing season temperatures and milder winters could allow some of these insects to expand their territory and produce an extra generation of offspring each year, said Noah Diffenbaugh, the Purdue University associate professor of earth and atmospheric sciences who led the study.

"Our projections showed all of the species studied spreading into agricultural areas where they currently are not endemic," said Diffenbaugh, who is interim director of the Purdue Climate Change Research Center. "The greatest potential range expansion was seen with the corn earworm, which is known to infest other high-value crops such as sweet corn and tomatoes. Warming could allow populations to survive the winter in the upper Midwest, the key region for corn production, as well as areas of the West where other high-value crops are grown."

The United States is the largest corn producer in the world and contributes almost half of the world's total production, according to the U.S. Department of Agriculture. Within the United States, corn and corn syrup are used in common food items such as cereal and soft drinks, as well as being used as feed for livestock. Outside of the United States, struggling countries depend on U.S. corn crops to feed starving populations.

"The world depends on U.S corn production for a variety of uses," Diffenbaugh said. "Ethanol production and a growing world population are increasing demand for corn. Expansion of the pests' ranges could have substantial impacts through decreased yields and increased costs for seed and pest management."

Diffenbaugh collaborated with Purdue professors Christian Krupke, an entomologist, and Corinne Alexander, an agricultural economist, as well as with Michael White from Utah State University. The team incorporated the survival temperature thresholds of each species with a highly detailed climate change model for the United States. A paper detailing their work was recently published online in Environmental Research Letters.

"Basically, we examined both the number of days warm enough for the pests to grow and the number of days cold enough to kill the pests, assuming the pests' documented climate tolerances remain the same," Krupke said. "This tells us what could happen in projected future climates. However, the model cannot take into account the dynamic nature of any ecological system. There are significant additional factors that could come into play such as interaction of the pests with the environment, relocation of corn and other crops and changing human management of the pests."

The team used the physiological thresholds for each species coupled with models of development to determine how each would respond to projected climate change scenarios.

For example, the pupal stage of the corn earworm overwinters and cannot withstand more than five days at temperatures below 14 degrees Fahrenheit. It also requires six days at a temperature of about 55 degrees Fahrenheit to complete development. By including these parameters in the climate model, the team was able to project future temperature-based distributions for each pest, Diffenbaugh said.

Krupke said the insects in this study should not be adversely affected by temperature increases.

"The limiting factor for these pests is usually cold tolerance, specifically their ability to overwinter and re-infest the crop the next season," he said. "Increases in temperatures, even summer temperatures, generally benefit these pests. An effectively longer season, or more days exceeding their minimum temperature range, provides them with additional time to feed, mate and reproduce."

The corn earworm is of particular concern because it is migratory and pesticide resistant, he said.

"The corn earworm is an established global pest, and particularly in the Southern U.S., where it has proven difficult to manage," Krupke said. "It is resistant to several existing pesticides, and adult moths are capable of being transported long distances in the jet stream to infest new crops."

Alexander said a reduction in corn yields could have substantial economic and social impacts, including higher food prices and reduced food supply.

"Losses due to insect pests, including the resources required to control them, is the biggest cost for corn production," Alexander said. "The European corn borer has been estimated to cost the United States around $1 billion annually, and the corn earworm is responsible for destroying about 2 percent of the corn crop."

"With increasing demand and a limited supply, even small reductions in yield, for example from a pest expanding its range by 60 miles, could result in substantial economic and social consequences," Alexander said. "In addition to loss of yields, the variation in yields could drive up the costs of insurance and disaster relief for farmers."

The research team next will look at a broader range of crops and will work to create a more complete modeling framework, Diffenbaugh said.

The team used a high-resolution climate model, believed to have the greatest detail currently available for the United States, to project daily temperatures for specific regions.

For the study's climate change scenario, the research group used a commonly accepted A2 emissions scenario from the Intergovernmental Panel on Climate Change that assumes greenhouse gas emissions continue to increase exponentially.

The Purdue Climate Change Research Center is affiliated with Purdue's Discovery Park. The center promotes and organizes research and education on global climate change and studies its impact on agriculture, natural ecosystems and society. It was established in 2004 to support Purdue in research and education on regional scale climate change, its impacts and mitigation, and adaptation strategies. The center serves as a hub for a range of activities beyond scientific research, including teaching, public education and the development of public policy recommendations.

The simulations were carried out using computational facilities in Purdue's Rosen Center for Advanced Computing, which is supported and administered by Information Technology at Purdue.

A publication-quality photo is available at http://news.uns.purdue.edu/images/+2008/corn-earworm-media.jpg

A publication-quality photo is available at http://news.uns.purdue.edu/images/+2008/corn-pests-media.jpg

Abstract on the research in this release is available at: http://news.uns.purdue.edu/x/2008b/081216DiffenbaughCornpests.html 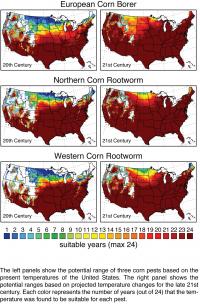