Dublin, Ireland, February 16th 2015 - Scientists at Trinity College Dublin have uncovered a marvel molecule that blocks a key driver of inflammatory diseases. The finding could meet a major unmet clinical need by inspiring new non-invasive treatments for arthritis, multiple sclerosis and Muckle-Wells syndrome, among a myriad of other inflammatory diseases.

In a study published this week in the world's leading preclinical medical journal Nature Medicine, the international research team led by Trinity and the University of Queensland Australia showed how the molecule MCC950 can suppress the 'NLRP3 inflammasome', which is an activator of the key process in inflammatory diseases.

Inflammasomes have been identified as promising therapeutic targets by researchers over the last decade. And now the discovery of MCC950's abilities represents a hugely significant development in the effort to find treatments for inflammatory diseases, for which current therapies are either highly ineffective or have major limitations.

Crucially, the finding also confirms that inflammatory diseases all share a common process, even though the part of the body becoming inflamed might differ.

Professor of Biochemistry at Trinity, Luke O'Neill, is the joint senior scientist behind the discovery. He said: "Drugs like aspirin or steroids can work in several diseases, but can have side effects or be ineffective. What we have found is a potentially transformative medicine, which targets what appears to be the common disease-causing process in a myriad of inflammatory diseases."

Dr Rebecca Coll, lead author on the paper, said: "MCC950 is blocking what was suspected to be a key process in inflammation. There is huge interest in NLRP3 both among medical researchers and pharmaceutical companies and we feel our work makes a significant contribution to the efforts to find new medicines to limit it."

Professor Matt Cooper, chemist and co-senior author from the University of Queensland's Institute for Molecular Bioscience (IMB), added: "MCC950 is able to be given orally and will be cheaper to produce than current protein-based treatments, which are given daily, weekly, or monthly by injection. Importantly, it will also have a shorter duration in the body, allowing clinicians to stop the anti-inflammatory action of the drug if the patient ever needed to switch their immune response back to 100% in order to clear an infection."

So far, the results have shown great promise for blocking multiple sclerosis in a model of that disease, as well as in sepsis, where in response to bacteria, potentially fatal blood poisoning occurs. However, the target for MCC950 is strongly implicated in diseases such as Alzheimer's disease, atherosclerosis, gout, Parkinson's disease and rheumatoid arthritis, which means it has the potential to treat all of these conditions.

Another disease where the new drug might have significant benefits is Muckle-Wells syndrome, which is a rare and severe auto-inflammatory disorder. Using blood samples from patients, the authors showed that MCC950 can block the rogue gene responsible for repeated inflammatory activation in sufferers.

Dr Dan Kastner of the National Institutes of Health USA, said: "MCC950 might well be a key addition to the options for treating Muckle-Wells syndrome and similar diseases."

Professor O'Neill added: "We are really excited about MCC950. We believe this has real potential to benefit patients suffering from several highly debilitating diseases, where there is currently a dire need for new medicines."

The study was a major collaboration between six institutions, including Trinity and the Universities of Queensland, Michigan, Massachusetts and Bonn.

The work in the O'Neill laboratory was supported by Science Foundation Ireland and the European Research Council. The research paper can be viewed here after the embargo has lifted: http://dx.doi.org/10.1038/nm.3806. A strictly embargoed copy can be viewed upon request.

** Images and captions are available from this Dropbox folder: https://www.dropbox.com/sh/ghydm6mk541r5oe/AACdHVX9qdQaXO41abvZk6Xua?dl=0 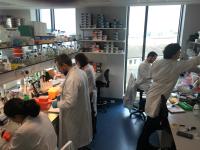