The ABM noted on its tropical cyclone warning website today, Jan. 9, that Tropical Cyclone Narelle is expected to strengthen as it moves toward the Northwest Cape. ABM said that gales with gusts to 100 kph are expected to develop in coastal areas between Whim Creek and Onslow including the Karratha area Friday morning (Jan. 11), then extend west to Exmouth and Coral Bay later Friday or early Saturday (Jan. 12). Thunderstorm activity is forecast to increase along the Pilbara coastline on Jan. 11, where some areas may experience heavy rainfall. On Saturday, winds are expected to increase along the western Pilbara coast.

NASA's Aqua satellite has been providing data to forecasters at the Joint Typhoon Warning Center. The Atmospheric Infrared Sounder (AIRS) instrument aboard Aqua has been capturing infrared and near infrared data that have shown colder cloud top temperatures and a more organized center of circulation in Narelle over the two days of Jan. 8 and 9.

Near-infrared imagery looks like a visible image. That near-infrared image showed a tight circulation center with a large band of thunderstorms wrapping around from the south. Western Australia is seen southeast of Narelle. All of the AIRS imagery was created at NASA's Jet Propulsion Laboratory in Pasadena, Calif.

Tropical Cyclone Narelle is expected to continue moving slowly southwest along the northwestern edge of a strong subtropical ridge (elongated area) of high pressure. That ridge is currently located over Western Australia.

Narelle is expected to continue intensifying over the next two days as it moves closer to the coastline. The Joint Typhoon Warning Center noted that after passing Cape Leveque Narelle will start to weaken. In the meantime, residents in the warning and watch areas should expect deteriorating conditions. 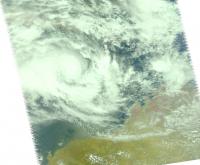