WASHINGTON, Aug. 20, 2017 -- Soldiering in arctic conditions is tough. Protective clothing can be heavy and can cause overheating and sweating upon exertion. And hands and feet can grow numb despite wearing such gear. To keep military personnel more comfortable and battle-ready in bitterly cold climes, scientists are now conducting research aimed at creating high-tech fabrics that heat up when powered and that capture sweat. These fabrics could also conceivably make their way to consumer clothing in the future.

Much of the Army's cold-weather hand gear was designed more than 30 years ago, so soldiers often opt to buy winter gloves at retail stores, Paola D'Angelo, Ph.D., says. But even this modern gear isn't enough to prevent paratroopers from losing feeling in their hands and feet when they parachute to earth in arctic conditions. "That's problematic if soldiers have to operate weapons as soon as they land," D'Angelo notes. "So we want to pursue this fundamental research to see if we can modify hand wear for that extreme cold weather."

The work was inspired by research led by Yi Cui, Ph.D., at Stanford University. Cui's team synthesized very fine silver nanowires, and then placed a network of the wires on cotton. By applying power to the silver nanowires, the researchers could heat the fabric.

D'Angelo, Elizabeth Hirst, Ph.D., and colleagues at the U.S. Army Natick Soldier Research, Development & Engineering Center, are working to extend this silver nanowire idea to fabrics suitable for military uniforms, such as polyester and a cotton/nylon blend. The Army team found that applying a mere 3 volts to 1-inch by 1-inch test swatches of these fabrics -- the output of a typical watch battery -- raises the temperature by 100 degrees Fahrenheit in just one minute. If these experimental fabrics can ultimately be used in uniforms, soldiers could dial up or down the voltage to vary the amount of heat their uniforms produce to match weather conditions. The added heating means uniforms could be thinner and lighter, an advantage for soldiers who must carry heavy loads and walk long distances.

The scientists are also incorporating a layer of sweat-absorbing hydrogel particles made of polyethylene glycol or poly(N-isopropylacrylamide). The researchers think these particles might stop other layers in the fabrics from getting wet, which would keep soldiers more comfortable during missions. After they return to base, the soldiers could release the sweat from their uniforms by hanging them up to dry in the warmer indoor air.

The silver nanowires on the fabrics can withstand repeated laundering, and now the researchers are working out how best to apply the hydrogel so it's equally durable. D'Angelo and coworkers will also investigate how the silver mesh and hydrogel interact with each other. Another research direction for the team is to consider different power sources for the silver mesh, because batteries would add too much weight to uniforms.

Once D'Angelo and her colleagues optimize the fabric for gloves, they might extend the technology to clothing for the chest and legs. And ultimately, she says, it could make its way into consumer products.

A press conference on this topic will be held Tuesday, Aug. 22, at 10:30 a.m. Eastern time in the Walter E. Washington Convention Center. Reporters may check-in at the press center, Room 154A, or watch live on YouTube http://bit.ly/ACSLive_DC. To ask questions online, sign in with a Google account.

The project is being supported by funding for basic research provided by the U.S. Army.

An ongoing need in cold weather clothing is novel textiles that will provide protection from extreme climatic operating environments, especially arctic cold weather. The main challenges with current garment systems are overdressing, moisture from sweat, discomfort from warmth following strenuous activity or entering heater areas and loss of manual dexterity from wearing gloves and mittens. We have developed a silver nanowire (AgNW)-coated electronic textile that provides multiple protection capabilities. AgNWs were prepared by reducing silver nitrate with ethylene glycol (EG) in the presence of silver seeds and polyvinyl pyrrolidone. The seeds were mixed with EG and heated to 170 °C. After heating, a silver nitrate solution in EG was added dropwise to the silver seeds solution and the reaction was heated until all the silver nitrate was reduced. Silver nanowire nucleation was assessed through optical microscopy and the sample was centrifuged to remove impurities. Fabric of different materials were coated with the nanowire ink and the thermal properties were examined. Scanning electron microscopy and Fourier Transform Infrared Spectroscopy revealed a conductive network of silver nanowires (~105 nm diam.) that were highly thermal insulating with a reflectance of >24% observed for 100% cotton indicating that AgNW-cloth is an effective IR reflector suitable for personal thermal management. Joule heating experiments were carried out and revealed that the temperature of the AgNW-coated textile could be increased by ~38 °C after applying 3 Volts across the fabric. Thermal images were also investigated and thermal radiation of fabric coated with AgNW ink was decreased by ~3°C resulting in textiles appearing colder. Finally, spacing between AgNWs was determined at ~500 nm suggesting that breathability of the textile was not compromised. The results of our research suggest that AgNW coated textiles are not only highly thermal insulating because it reflects infrared radiation but it also allows heating of the textile. This nanowire-coated textile could efficiently provide protection from extreme climatic operating environments.

Micro- and nanoparticle forms of hydrogels have been extensively studied for their many potential applications. Stimuli responsive gels in particular have sparked great interest in biomedical and drug delivery fields due to the ability to tune their response to biologically relevant conditions. Given these working conditions, most work has focused on behaviors at room or elevated temperatures. Relatively little study has been done on the effect of extreme cold temperature on microgel particles. As the range of applications for microgels expands, the stability of microgel systems in extreme environments will be of interest. To that end, this work examines the effect of repeated cold treatment on the morphology and response of three microgel systems. Polyethylene glycol (PEG) and poyl(N-isopropylacrylamide) microgels are evaluated as two model systems with differing lower critical solution temperatures (LCST). In addition, poly(acrylamide-acrylic acid) microgels are studied as a system with upper critical solution temperature (UCST) responsiveness. 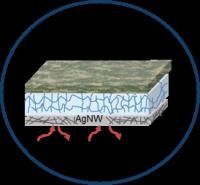