Hydrogen fuel cells produce electricity, we are increasingly thinking about hydrogen as the successor of crude oil. But where will the hydrogen come from? Its ecologically cleanest source could be industrial - or even domestic! - bioreactors with green algae. Their future construction will be possible thanks to an international team of researchers, who have for the first time precisely described the chemical reactions responsible for the stability of hydrogen generation in an aerobic environment by algal enzymes.

Hydrogen, that is, the fuel of the ever-nearer future. Its ecologically cleanest source is water that can be photosynthetically split by algae operating in suitable conditions. However, there is a serious obstacle standing in the way of constructing efficient and at the same time truly green (figuratively and literally) bioreactors: hydrogenases, the enzymes that are directly responsible for the production of hydrogen, are inactivated in the presence of oxygen. Would it be possible to make them resistant to the effect of the atmosphere? Until now this was not possible, because the mechanism of their degradation by oxygen was not sufficiently well understood. Only now have these complex processes been fully described for the first time and published in the journal Nature Chemistry in an article prepared by a team of scientists from Poland, France, Great Britain, Spain and the United States.

"Hydrogen is an element that is widespread in our environment. But its universality does not mean that it is readily available in large quantities, using ecologically clean methods," notes Dr. Adam Kubas from the Institute of Physical Chemistry of the Polish Academy of Sciences (IPC PAS) in Warsaw, one of the co-authors of the publication, and gives the following example: "The simplest method of hydrogen production seems to be electrolysis of water, but it is only simple and fairly ecological if clean power is available. Meanwhile, the power generated currently comes into being in processes that have little in common with real ecology."

The road to ecologically really pure hydrogen resources turns out, however, to lead just through water - and more specifically by what floats in it. Algae, or seaweed, are a comprehensive group of microorganisms that process water and carbon dioxide by the usual process of photosynthesis, and as a result emit oxygen into the environment. It arises due to enzymes known as hydrogenases. The reactions occur in a specific position within the protein: in a complex active site, in which a key role is played by two atoms of iron (Fe-Fe) or an atom of nickel and an atom of iron (Ni-Fe).

Since the late 1990's it has been known that when there is no sulfur in the algae's environment, instead of oxygen they start to produce... hydrogen. What's more, it was quickly realized that in natural conditions algal enzymes are one of the best hydrogen catalysts! Unfortunately, hydrogenases have a serious drawback: when exposed to oxygen they undergo degeneration and stop working. Meanwhile, providing them with an anaerobic environment in industrial or domestic conditions would be very difficult.

The authors of the publication in Nature Chemistry investigated reactions occurring in the iron-iron (Fe-Fe) hydrogenases. The researchers were particularly interested in identifying the migration paths of the oxygen molecules from the surroundings to the active site within the protein structure and understanding the course of the reactions they were involved in there.

"Our study rather resembled searching for the way through an unknown maze, with the difference that ordinary mazes are large and effectively two-dimensional, whereas ours was three-dimensional and microscopically small. In addition, we could not look directly inside it! Experimental data only told us of the speed of some of the electrochemical reactions occurring in hydrogenases under specified conditions," explains Dr. Kubas.

Simulations of gas transport were carried out, among others, at the University College London (UCL), at the University of Cambridge as well as at the CIC nanoGUNE in San Sebastián. Quantum chemical calculations associated with the transformations of oxygen in the active Fe-Fe site were started by Dr. Kubas at UCL, and completed at the IPC PAS. The theoretical results were confronted with the electrochemical experiments on hydrogenases, conducted mostly at the Centre National de la Recherche Scientifique in Marseille.

The research team proposed and verified the full catalytic cycle associated with the reactions of oxygen in the active site of the hydrogenases. Two pathways along which oxygen molecules penetrated into the site were identified in the structure of the proteins, wherein one of them proved to be frequented particularly often. The availability of electrons in the protective mechanism was also found to play a key role.

"Why have electrons become important? It turns out that when they are absent in the active site, reactions with oxygen lead to the formation of hydroxyl radicals, which damage the protein. However, if electrons are available, oxygen can be reduced to completely harmless water," explains Dr. Kubas.

In order to confirm the correctness of the new catalytic model the researchers proposed making some small modifications to the structure of the tested hydrogenases. The substitution of one of the small amino acids with a bulky one on the path of transport of oxygen was expected to hinder the migration of gas molecules to the active site. Careful experiments with appropriately mutated hydrogenase confirmed these assumptions and validated the model.

Research on hydrogenases at the IPC PAS is now being continued under the SONATA grant from the Polish National Science Centre. In the coming years, its aim will be to determine the natural regulation mechanisms of electron transport to prevent the creation of destructive hydroxyl radicals (HO* ). If the work is successful, the first high-performance and fully ecological bioreactors producing hydrogen can be expected in no more than a dozen or so years.

The road to green hydrogen runs through mazes in algal proteins 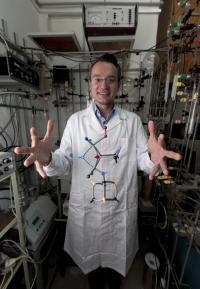 Dr. Adam Kubas, Institute of Physical Chemistry of the Polish Academy of Sciences