Falmouth, Mass. – Future simulations of climate in the Amazon suggest a longer dry season leading to more drought and fires. Woods Hole Research Center scientists Michael Coe, Paulo Brando, Marcia Macedo and colleagues have published a new study on the impacts of fire and drought on Amazon tree mortality. Their paper entitled “Abrupt increases in Amazonian tree mortality due to drought-fire interactions,” published in the Proceedings of the National Academy of Sciences, found that prolonged droughts caused more intense and widespread wildfires, which consumed more forests in Amazonia than previously understood.

Over an eight-year period, the team repeatedly burned 50-hectare forest plots in southeast Amazonia to learn how fire frequency and weather conditions affected tree deaths. The surprise, according to Dr. Coe, was "the importance of drought. The forest didn't burn much in average years, but burned extensively in drought years." Climate change is expected to cause shorter more intense rainy seasons and longer dry seasons, with more frequent droughts like those observed in this study. According to Dr. Coe, "We tend to think only about average conditions but it is the non-average conditions we have to worry about."

NASA satellite data provide a regional context for results from the experimental burns. In 2007, fires in southeast Amazonia burned 10 times more forest than in an average climate year, "an area equivalent to a million soccer fields" according to co-author Douglas Morton of NASA.

Large portions of Amazonian forests are already experiencing droughts and are increasingly susceptible to fire. "Agricultural development has created smaller forest fragments, which exposes forest edges to the hotter dryer conditions in the surrounding landscape and makes them vulnerable to escaped fires," said Dr. Macedo. "These fragmented forests are more likely to be invaded by flammable grasses, which further increase the likelihood and intensity of future fires."

According to lead-author Dr. Paulo Brando, "This study shows that fires are already degrading large areas of forests in Southern Amazonia and highlights the need to include interactions between extreme weather events and fire when attempting to predict the future of Amazonian forests under a changing climate."

"None of the models used to evaluate future Amazon forest health include fire, so most predictions grossly underestimate the amount of tree death and overestimate overall forest health," said Dr. Coe. The results of this project show that extreme droughts may interact with fires to push Amazonian forests beyond a tipping point that may abruptly increase tree mortality and change vegetation over large areas.

Fire and drought may push Amazonian forests beyond tipping point 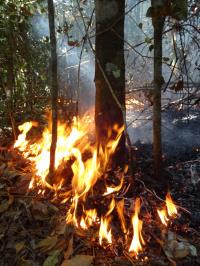