Close but no cigar: How 16th Century observations paved the way for Darwin's landmark study

Documents dating back to the 16th Century provide a unique insight into one of Darwin's landmark studies - according to new research from the University of East Anglia.

In 1862, Darwin presented the case that some plant species have two floral forms that differ in height and arrangement of the male and female sexual structures - and adopted the term 'heterostyly'.

Darwin had published his hypotheses of Natural Selection in the Origin of Species (1859) - just a year before first noticing heterostyly. And the breakthrough influenced him to eventually unravel the origin and consequences of this reproductive mechanism.

But research to be published tomorrow shows that Darwin was not the first to observe heterostyly. It had in fact been documented in a number of 17th and 18th Century botanical records.

And the phenomenon had even been noticed as far back as the16th Century - a time when plants were studied and catalogued for their medicinal benefits and sometimes even for magic and spells. The true significance however of the two floral forms was not realised at the time.

Lead researcher Prof Phil Gilmartin, from UEA's School of Biological Sciences, said: "Darwin is widely recognised as the first to study pin and thrum flowers in Primula and importantly he was the first to provide an explanation for the functional significance of the two types of flower.

"But while looking through illustrations from the book Flora Londinensis by William Curtis, I was struck by a Primula print which showed the two types of flower captured in a copper plate engraving dating back to the late 1700s. It predated Darwin's observations by more than 70 years."

This realisation triggered a journey into archives of botanical texts, letters, copper-plate prints, and drawings dating back to the 16th century - in search of earlier documents that could have influenced Darwin and the origins of his idea.

The result is a paper, to be published tomorrow in the journal New Phytologist, in which Prof Gilmartin presents the full history of Darwin's discovery for the first time.

"We already knew that heterostyly had been described as far back as 1583," he said. "But this work pulls together all the existing documentation, including early floral prints, to trace the history of the idea - over three centuries.

"Going right back to the 16th century, much of the documentation was in the form of 'herbals' - descriptions of plants put together for medicinal purposes. These sorts of texts would sometimes also hold information about their magical powers and legends associated with them.

"Science had clearly moved on by the time of Darwin - but we have traced the origins of his work right back to what we think are the very first observations of heterostyly, some three centuries before his landmark paper. At least seven botanists, through the ages either drew or described the two forms of flower before Darwin made his observations. But they just didn't make the connection and realise the significance of what they were documenting."

Darwin's correspondence reveals that his breakthrough was assisted by his children, who gathered 522 flower stalks for his studies. But his contemporary Freidrich Hildebrand was not so fortunate - he was thwarted when his plants were 'destroyed by children in the botanical gardens' in Bonn.

Other botanists to notice the two forms of flower include Darwin's former Cambridge tutor and mentor John Stevens Henslow who, as noted by Kohn and co-authors in 2005, had drawn both in 1826.

Other representations were found in Wilibald Artus' Hand-Atlas sämmtlicher medicinisch-pharmaceutischer Gerwärchse (1848) and in William Curtis' Flora Londinensis (published on March 1, 1791) - which is thought to contain the first printed use of the terms 'pin-eyed' and 'thrum-eyed' nearly 100 years before Darwin used the same terms.

Little did Darwin know that his own grandfather Erasmus Darwin had corresponded directly with William Curtis in November 1781 expressing his delight with the Flora Londinensis 'which he had taken ever since it was published'.

Prof Gilmartin said: "It is surprising that Darwin wasn't aware of Curtis' work. But from the evidence we have gathered, it is clear that he did not know about the engravings and descriptions of pin and thrum flowers in Flora Londinensis.

"His mentor Henslow was however aware of the images. But despite illustrating the two forms of flower himself, he did not publish them. Had he done so he would no doubt have cited Curtis' prior observations."

The botanist, fungi specialist and in later years poverty-stricken recluse Christiaan Hendrik Persoon is later cited by Darwin as having first observed heterostyly in Primula in 1794. However what Darwin did not realise was that Persoon's source of information was in fact Curtis' Flora Londinensis.

But it is three images dating back to 1614, 1611 and 1605 that researchers believe to be the first to show the differences between Primula pin and thrum flowers.

Hortus Floridus by Crispin van de Passe the Younger, published in 1614, contains copper-plate images of plants drawn 'true to life' and arranged by season, with Primula thrum flowers depicted in Spring. Meanwhile a second part to Hortus Floridus, thought to pre-date the 1614 publication, shows Primula pin flowers. This publication is thought to be dated around 1605, and arranges plants as food or medicinal plants. Meanwhile copper-plate images of Primula pin flowers in Paul Reneaulme's Historiae Plantarum Plantae are dated to 1611.

But it is a Latin text from 1583 by the botanist Carolus Clusius - who famously introduced tulips to the Netherlands - that is thought to contain the first description of long and short style forms of Primula flower. This fact was rediscovered in 1943 by the Dutch botanist and scholar van Dijk while reading Clusius' Rariorum Plantarum Historia from 1601. The descriptions of pin and thrum flowers caught his attention, and the same description is also found in Clusius' Rariorum Aliquot Stirpium from 1583.

Prof Gilmartin said: "By the time Darwin published his follow-up Different Forms of Flowers in 1877, he had discovered that heterostyly had been previously observed and documented.

"The early botanists simply did not realise the significance of what they were documenting. Back in 1583, Clusius was focussed on detailed observation - but as highlighted by van Dijk, he did not recognise that both forms are found in the same species. Had he done so, he could have provided us with the earliest description of the two forms of flower 279 years before Darwin.

"Pauli de Reneaulme really made a significant observation in 1611 because he assigned significance to the different flower forms. He attempted to classify plants by morphology, in contrast to his contemporaries who focused their groupings on seasons and flowering time."

Reneaulme described the two forms as Makrostylos (long style) and Anostemon (short style) and concluded that 'these minute details are not in vain for God and Nature distinguish these for a reason' - however he did not explore the reason.

The Swedish botanist Carl Linneaus on the other hand wrote in 1792 that 'the botanist is not concerned with slight variations' and used Primula corollas as an example where 'flower enthusiasts focus on small floral details that no sane botanist would consider important'.

Prof Gilmartin said: "It is this difference in attention to detail and the dominance of Linnaean thinking during the 18th and 19th centuries that led to the failure to recognise the significance of such important floral morphologies.

"The recognition of two forms of flower by Clusius, de Reneaulme, Curtis, Persoon, Henslow and then Darwin, shows not only the importance of small difference that Linnaeus rejected, but the importance of seeking to understand the reasons for these differences. That is what Darwin realised, where others had only observed."

"Indeed, in his 1887 autobiography, Darwin wrote that 'no little discovery of mine ever gave me so much pleasure as making out the meaning of heterostyled flowers'," he added.

'On the Origins of Observations of Heterostyly in Primula' is published in the journal New Phytologist on Monday, August 10, 2015.

It is one of three pieces of research on Primula to be published in the August edition of the journal alongside 'Integration of genetic and physical maps of the Primula vulgaris S locus and localization by chromosome in situ hybridisation' and 'Oakleaf: an S locus-linked mutation of Primula vulgaris that affects leaf and flower development'. 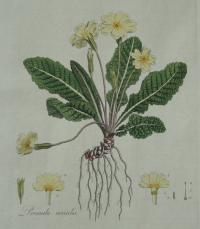