A massive investigation published in Nature shows that contrary to popular belief, a majority of papers in suspected biomedical predatory journals (57 percent) are from high or upper middle income countries, with many coming from prestigious institutions.

Largely unknown a decade ago, there are now an estimated 8,000 predatory journals collectively publishing more than 400,000 research studies each year. These journals offer to rapidly publish research findings, typically at a lower cost than legitimate journals, but do not provide quality controls such as peer-review. Predatory journals are also difficult to search, meaning that health-care providers and researchers can rarely learn from the data in these journals.

Researchers from The Ottawa Hospital and the University of Ottawa analyzed 1,907 research papers published in 220 suspected biomedical predatory journals. The journals were randomly selected from well-known but controversial lists compiled by University of Colorado librarian Jeffrey Beall.

They found that the top countries publishing in these journals were India (27 percent), the United States (15 percent), Nigeria (5 percent), Iran (4 percent) and Japan (4 percent). The U.S. National Institutes of Health was the most frequent funder mentioned among the very few articles that credited one.

"Our research debunks the common belief that predatory journals are only a problem in low income countries," said senior author Dr. David Moher, a senior scientist at The Ottawa Hospital and associate professor at the University of Ottawa in Canada. "Predatory journals publish research from scientists around the world, including those based at prestigious high income institutions."

The authors note, however, that their results should be interpreted in the context of the overall scientific output for each country and institution. For example, the United States publishes more research than any other country, and the vast majority is in legitimate journals.

"While quality can be patchy even in legitimate journals, we found that it was far worse in suspected predatory journals," said Larissa Shamseer, a PhD student at The Ottawa Hospital and the University of Ottawa and co-author of the study. "For example, clinical trials published in predatory journals are much less likely to provide information on research ethics approval, trial registration and randomization into treatment groups. These details are essential for other researchers to be able to gauge the validity of the results."

"We estimate that data from millions of patients and animals may be tucked away in predatory journals," said Dr. Manoj Lalu, associate scientist and anesthesiologist at The Ottawa Hospital, assistant professor at the University of Ottawa and co-author of the study. "Most of this work is undetectable by readers, including by health-care providers looking for research to inform patient care."

The researchers also made a list of the top institutions publishing in their sample of suspected predatory journals and attempted to contact the corresponding authors. Of 87 emails sent, 18 were responded to. Only two of the authors said they were aware that the journal they published in was potentially predatory.

Understanding the importance of helping researchers publish their results transparently and avoid predatory journals, Dr. Moher founded the Centre for Journalology at The Ottawa Hospital in 2015. The Centre includes a full-time Publications Officer who provides training and consultations to researchers at The Ottawa Hospital and partner institutions.

"Some predatory journals are very good at impersonating legitimate journals," said Dr. Kelly Cobey, Publications Officer at The Ottawa Hospital, adjunct professor at the University of Ottawa and co-author of the study. "We need to educate researchers about this issue."

The team has also developed the following resources to help researchers with this issue:

"Stamping out predatory journals and improving how we publish research results could lead to big improvements in health," said Dr. Moher. "Funders, institutions, researchers and publishers need to work together to address this issue."

The Centre for Journalology is supported by generous donations to The Ottawa Hospital ), as well as contributions from other partners.

The Ottawa Hospital: Inspired by research. Driven by compassion

University of Ottawa: -- A crossroads of cultures and ideas

The University of Ottawa is home to over 50,000 students, faculty and staff, who live, work and study in both French and English. Our campus is a crossroads of cultures and ideas, where bold minds come together to inspire game-changing ideas. We are one of Canada's top 10 research universities -- our professors and researchers explore new approaches to today's challenges. One of a handful of Canadian universities ranked among the top 200 in the world, we attract exceptional thinkers and welcome diverse perspectives from across the globe. http://www.uottawa.ca 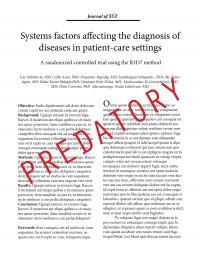 Graphic Illustration of a Predatory Journal