Optical microscopy enables us to observe motions of protein molecular motors as they work in the biological systems. By labeling molecules of interest with appropriate probes, the motions of individual molecules can be tracked. Localization precision (how precisely we can determine the position) of moving molecule is primary determined by the photon numbers captured by a single image frame. One nanometer localization precision and millisecond time resolution can be achieved with fluorescent probes, by capturing ~10,000 photons. Although further improvement of the localization precision is crucial for deeper understanding of the operation mechanisms of molecular motors, limited number of photons obtained from the fluorescent probe have restricted the improvement. Recently, gold nanoparticles (AuNPs) which strongly scatter the incident light, have been used as an alternative of the fluorescent probes (Fig. 1). In previous studies, microsecond time resolution has been achieved with AuNPs. However, the fundamental limit of the localization precision has not been experimentally investigated in detail.

Then, by using the developed imaging system, the authors observed stepping motions of a dimeric linear molecular motor kinesin, moving along the microtubule in detail (Fig. 3). One motor domain (head) of the kinesin was labeled by 40 nm AuNP, and the motion was captured at 10 microsecond time resolution. In a previous study, unbound head showed diffusional motion only at right side of bound head on microtubule. This result implies unidirectional rotation of two heads of kinesin during linear motion. High-localization, high-speed single-particle tracking performed in this study successfully revealed details of the transition from bound to unbound states of the kinesin head. Because no apparent leftward trails were observed, the authors concluded that the kinesin actually rotates unidirectionally during the linear motion. 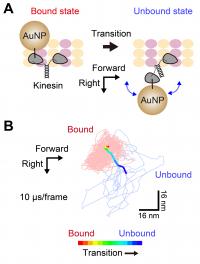