The Asian arowana (Scleropages formosus), known as the dragon fish, is one of the most prized and expensive aquarium fishes in the world. Scleropages is an extant freshwater fish of Osteoglossidae with a transoceanic distribution in Southeast Asia and Australia. All previously Known fossil records of Scleropages are scales, otoliths and isolated fragments of bones, and the distribution of osteoglossids remains a zoogeographical enigma.

In a paper published in the latest issue of Vertebrata PalAsiatica, Dr. ZHANG Jiangyong from the Institute of Vertebrate Paleontology and Paleoanthropology (IVPP) of the Chinese Academy of Sciences and Dr. Mark Wilson from University of Alberta, reported a new species of osteoglossid fish, Scleropages sinensis sp. nov., from the Early Eocene Xiwanpu Formation in Hunan and the Yangxi Formation in Hubei, China. The discovery of Scleropages sinensis dates the divergence of Scleropages and Osteoglossum as at least old as the Early Eocene, which is a significant step toward solving this zoogeographical puzzle.

The body of the new fish is fusiform in adults, with median fins posteriorly positioned and pelvic fins in abdominal position. Skull bones are thick and squamation is heavy. The standard length of the largest specimen is 175 mm, that of the holotype is 140 mm, and that of the smallest is 78 mm.

Fossil Scleropages are known from the Maastrichtian of India, the Maastrichtian/Late Paleocene of Africa, the Paleocene of Europe, the Eocene of Sumatra, and the Oligocene of Australia. All of these earlier records are scales, otoliths and isolated fragments of bones. Therefore, this finding is the first skeletons of fossil Scleropages ever unearthed in the world with some specimens exceptionally well-preserved.

"This new fish resembles Scleropages in skull bones, caudal skeleton, the shape and position of fins, and reticulate scales. Therefore, it must belong to the genus", said Dr. ZHANG.

The new fish is different from all extant species of Scleropages in features: the nasals do not appear to be ornamented; the sensory pore in the antorbital is large; the posterior infraorbitals are not quite covering the dorsal limb of the preopercle; the posteroventral angle of the preopercle is produced to point; the posteroventral margin of the opercle is concave and the ventral end of the bone is produced to a point; the pectoral fin is very long and extends well behind the beginning of the pelvic fin; the vertebral count is about 46-48; the parapophyses are shorter and the upper and lower caudal rays are nearly as long as the inner rays.

The new fish is closer to its Asian neighbor, S. formosus, than to its southern relative, S. leichardti. Scleropages formosus inhabits natural lakes, swamps, flooded forests, and slowly moving, deep parts of rivers with overhanging vegetative cover. It is a carnivorous fish and its food consists mainly of insects, fishes, worms, small amphibians, small mammals, and even birds. S. sinensis may live in the same natural environment and have a similar diet except for the largest items.

Sexual dimorphism may exist in S. sinensis. The presumed male has a slimmer and shallower body, a relatively larger head, and a deeper mouth cleft. The discovery of Scleropages sinensis sp. nov. dates the divergence of Scleropages and Osteoglossum to no later than the Early Eocene.

This work was supported by the National Natural Science Foundation of China. 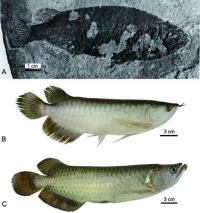