(Santa Barbara, Calif.) –– Understanding exactly how stem cells form into specific organs and tissues is the holy grail of regenerative medicine. Now a UC Santa Barbara researcher has added to that body of knowledge by determining how stem cells produce different types of "daughter" cells in Drosophila (fruit flies). The findings appear today in the Proceedings of the National Academy of Sciences.

Denise Montell, Duggan Professor of Molecular, Cellular and Developmental Biology at UCSB, and colleagues studied the ovaries of fruit flies in order to see stem cells in their natural environment. Because these organisms are excellent models for understanding stem cell biology, researchers were able to shed light on the earliest stages of follicle cell differentiation, a previously poorly understood area of developmental biology. "It is clear that the fundamental principles that control cell behavior in simple animals are conserved and control the behavior of our cells as well," she said. "There is so much we can learn by studying simple organisms."

Using a nuclear protein expressed in follicle stem cells (FSCs), the researchers found that castor, which plays an important role in specifying which types of brain cells are produced during embryonic development, also helps maintain FSCs throughout the life of the animal. "Having identified this important protein molecule in fruit flies, we can test whether the human version of the protein is important for stem cells and their daughters as well," said Montell. "The more we know about the molecules that govern stem cell behavior, the closer we will get to controlling these cells."

Her research team placed the evolutionarily conserved castor (Cas) gene, which encodes a zinc finger protein, in a genetic circuit with two other evolutionarily conserved genes, hedgehog (Hh) and eyes absent (Eya), to determine the fates of specific cell progeny (daughters). What's more, they identified Cas as a critical, tissue-specific target of Hh signaling, which not only plays a key role in maintaining follicle stem cells but also assists in the diversification of their progeny.

The study also shows that complementary patterns of Cas and Eya reveal the gradual differentiation of polar and stalk precursor cells at the earliest stages of their development. In addition, it provides a marker for cell fates and insight into the molecular and cellular mechanisms by which FSC progeny diverge into distinct fates.

Follicle cells undergo a binary choice during early differentiation. Those that turn into specialized cells found at the poles of egg chambers go on to make two cell types: polar and stalk. The three genes, Cas, Eya and Hh, work in various combinations, sometimes repressively, to determine which types of cells are formed. Cas is required for polar and stalk cell fate specification, while Eya is a negative regulator of these cells' fate. Hh is necessary for Cas to be expressed, and Hh signaling is essential to repress Eya.

"If you just had one of these markers, it was hard to tell what's going on," explained Montell. "All the cells looked the same and you had no idea when or how the process occurred. But now we can actually see how the cells acquire different identities."

Hh also plays many roles in embryonic development, adult homeostasis, birth defects, and cancer. Hh antagonists are currently in clinical trials for the treatment of several types of cancer. However, Hh signaling is important in so many different cell types and tissues that systemic delivery of such inhibitors may cause serious side effects. Therefore identifying the essential, tissue-specific effectors of Hh has the potential to lead to the identification of more specific therapeutic targets.

Someday, targeted inhibition of Hh signaling may be effective in the treatment and prevention of many types of human cancers. 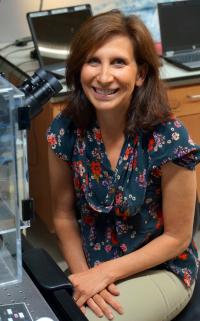