Of course, roosters crow with the dawn. But are they simply reacting to the environment, or do they really know what time of day it is? Researchers reporting on March 18 in Current Biology, a Cell Press publication, have evidence that puts the clock in "cock-a-doodle-doo" (or "ko-ke-kok-koh," as they say in the research team's native Japan).

"'Cock-a-doodle-doo' symbolizes the break of dawn in many countries," says Takashi Yoshimura of Nagoya University. "But it wasn't clear whether crowing is under the control of a biological clock or is simply a response to external stimuli."

That's because other things—a car's headlights, for instance—will set a rooster off, too, at any time of day. To find out whether the roosters' crowing is driven by an internal biological clock, Yoshimura and his colleague Tsuyoshi Shimmura placed birds under constant light conditions and turned on recorders to listen and watch.

Under round-the-clock dim lighting, the roosters kept right on crowing each morning just before dawn, proof that the behavior is entrained to a circadian rhythm. The roosters' reactions to external events also varied over the course of the day.

In other words, predawn crowing and the crowing that roosters do in response to other cues both depend on a circadian clock.

The findings are just the start of the team's efforts to unravel the roosters' innate vocalizations, which aren't learned like songbird songs or human speech, the researchers say.

"We still do not know why a dog says 'bow-wow' and a cat says 'meow,' Yoshimura says. "We are interested in the mechanism of this genetically controlled behavior and believe that chickens provide an excellent model."

Putting the clock in 'cock-a-doodle-doo' 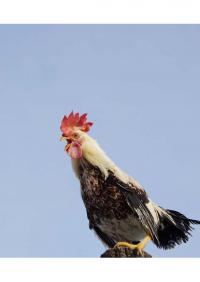 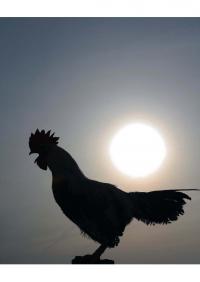